Red Deer’s Red Hot for the Season of Champions

The Scotties Tournament of Hearts may be more than six months away – but the promotions team is firing up the momentum for what could well be the biggest ever in the history of Canada’s women’s curling championship. 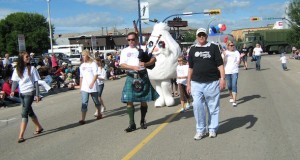 Scott Dickson pipes the Scotties mascot "Little Softie" along the parade route at Westerner Days, with the support of local volunteers.

They were front and centre July 14th at the Sutter Fund Charity Golf Classic opening banquet with a prize basket up for auction – including an “Opener” ticket package and four nights’ accommodations at the Quality Inn North Hill.  They also brought along the Kurling game that proved to be the big hit of the night. Two days later, volunteers were on the scene to host the Scotties booth at the local Farmers Market, handing out candy bags, gifts and promotional brochures. On July 20th, official Scotties mascot Little Softie joined bagpiper Scott Dickson and a group of volunteers to march in the Westerner Days Parade. The temperatures have already been hot enough, but the Scotties ambassadors were right back the next day to spice things up at the BIG 105 Chili Cook-Off.  The main course was Caribbean Chicken Chili served with a Scotties Snowball Surprise – a very cool drink to celebrate the hottest game on ice! The momentum carries through into August with a heavy schedule planned, including appearances as a hole sponsor at the Alberta Sports Hall of Fame Golf Tournament August 4th, the Mavis Goss Open Golf Tournament August 5th, as well as the Sylvan Lake Farmers Market. Get your tickets now – before they’re too hot – just by clicking here.