The first edition of the Canadian Country Weekend music festival August 12 – 13 in Fort Macleod was fertile ground for promoters of the 2012 Ford World Women’s Curling Championship. With a host of major stars taking the stage – including the likes of Ian Tyson, Terri Clark and Gord Bamford – the FWWCC promotions crew was on site to share the excitement of live championship curling, coming to Lethbridge March 17 – 25. 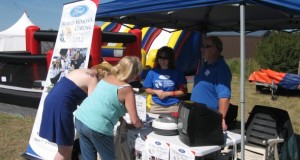 The volunteers were busy both days with the steady lineup of fans filling out entries for the August draw to win a Double Impact “Opener” package which includes two tickets for the first 11 draws. The event booth will be front and centre in the days ahead at the Whoop-Up Days parade August 23 and market place August 23 – 27, the Lethbridge Senior Citizens Organization Family Festival on August 23, and the Taber Cornfest August 26 – 27. And, all the music fans should know…. every same-day pass to the Ford World Women’s Curling Championship includes complimentary admission to the Patch… where you’ll hear some amazing Canadian bands after a great day of action on the ice!  Get your tickets now just by clicking here.