The untiring effort of a virtual army of volunteers is the secret to the success of every Season of Champions event.  In the case of the 2012 Scotties Tournament of Hearts, Halga and Dave Phillips are among the most dedicated of the troops. The Red Deer residents have been rabid fans of the game dating back to their first championship experience at the 1971 Macdonald Brier in Quebec City.  Over subsequent years, they’ve tallied up a total of 31 Briers and 21 Scotties Tournament of Hearts – not to mention a host of Seniors, Mixed, Juniors, Canada Cups and every single edition of the World Financial Group Continental Cup of Curling. 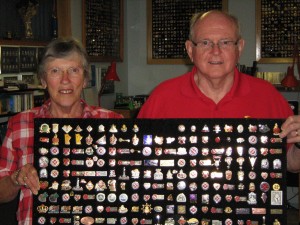 2012 Scotties Tournament of Hearts volunteers Halga and Dave Phillips with a few of the 7,500 pins they've collected over the past 25 years. (Photo: Amanda Carroll)

“We attend about five or six events each year,” notes Dave.  “Last year we got to six and we’re planning on four this season.”  While the couple enjoys every one of them, as native maritimers, Halifax Briers and any event taking place in New Brunswick stand out as special memories. Volunteering is a role the Phillips simply enjoy.  “Meeting all the people and talking about curling all the time just makes every event fun,” comments Halga.    “And, as an on-ice official it’s great to be so close to all the action and chat with the curlers during the games,” adds Dave. They’ve also earned a reputation as two of the most avid pin collectors on the curling circuit, a passion that began when they were stationed in Germany between 1977 and 1981.  The collection has grown to some 7,500 pins from around the world. “We used to trade pins with the teams we curled against and that’s how we got started,” explains Halga.  “In 1984 we attended the Brier in Victoria and took along about 250 pins to trade… and we’ve just carried on from there.” Drawing on the organizational skills acquired through his military career, Dave has taken the hobby to a high tech level, scanning all the pins into the computer.  With his laptop right there at every event they attend, he has immediate access to information on specific pins. Halga and Dave will be on hand with their collection February 18 – 26 at the Scotties Tournament of Hearts.  Come out to Red Deer and join them… you can get your tickets by clicking here.