A Cool Draw for a World-Class Double

Volunteers for the 2012 Ford World Women’s Curling Championship have been on the job all summer, turning up the heat for the big event coming to Lethbridge March 17th – 25th. 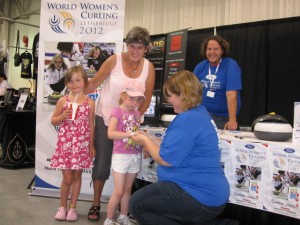 At every gathering they attended, fans had the chance to enter a free draw for a Double Impact “Opener” package… including two tickets for the first 11 draws.  When August came to a close, Denise Colp was the lucky winner of a pair of prime seats to see the world’s best on the ice at the ENMAX Centre. The FWWCC team was on site every day – August 23rd to 27th – for the Lethbridge Whoop-Up Days which attracted nearly 72,000 people to the city’s annual summer festival. At the same time, they were there for the Taber Cornfest August 26th and 27th – promoting the Double Impact draw and generating awareness for the upcoming world women’s championship. Summer may be almost done but the work of the dedicated group of volunteers has just begun.  A busy fall agenda starts with the Lethbridge Curling Club’s Registration Open House September 8th and 9th and the wrap-up for the men’s and women’s golf leagues at Henderson Lake Golf Course. “You Gotta Be There” when the world comes to town next March!  Great seats are available just by clicking here.