So, another great summer has come to an end, but not without a little bit of fun! Only a few short weeks ago the team was back together in Halifax for the Whitecap Curling Academy. Since the team (Thomas Scoffin, Corryn Brown, Derek Oryniak) was flying in a day early, I got to go to the camp residence the same night as they were due to arrive. I unpacked and waited anxiously for them to arrive from the airport. I was lucky enough to find some of the camp leaders, Jamie Danbrook and Danielle Parsons, and steal some of their pizza while I waited. Once the team arrived, we did some catching up, and the next day, we hit the waterfront. We walked around and browsed some of the little shops, and we even went rock climbing on a false rock wall. We headed back to the res after that and registered. I was extremely excited for everyone to arrive. I have a lot of curling friends that I only see at Whitecap, so it was amazing to reunite with everyone. And then, we got to hit the ice! Being on the ice again was so great. I learned a lot of stuff about who I am and what I bring to the team after spending a week with my teammates. It was great to be in that situation because it will mold us better for when we are in Innsbruck. We were pulled out of a couple of sessions to work as a team with our coach, Helen Radford, and we even had to do a physical fitness test. And yes, that did include the horrid beep test. But I did improve from the test that the team took in May in Edmonton, so I was really pleased with that! 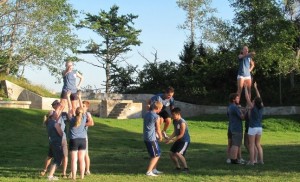 Group Cheer at Whitecap: Derek and Thomas are in the middle group; Corryn and Emily are on the far right. (Photo courtesy of Emily Gray)

A part of Whitecap is to have a cheer competition against the other colour groups. This year there were four groups: Indigo, Red, Purple, and Gold.  As Indigo, we had dominated week one, so we had to keep it up on week two. The Indigo team was proudly the first group in Whitecap history to ever put actual cheer ‘stuff’ in their cheer. One of the girls suggested it and we took it from there. Only two people in the group of 12 had ever been in cheerleading before, so they taught us how to do the lifts and it was a success! Indigo won the cheer! Unfortunately we did not win the shootout held the next day, but we beat our week-long rivals, the Red group, so that’s all that mattered. Another aspect of Whitecap is that if you’re late or forget something or sleep in, you have to perform at dinner. My lovely teammates ended up forgetting some sheets and had to perform. However, I had to get up and perform with them. So we got up there, and they told us we had to waltz. Talk about team bonding! I do have to say, I think my and Derek’s waltz was better then Thomas’ and Corryn’s! 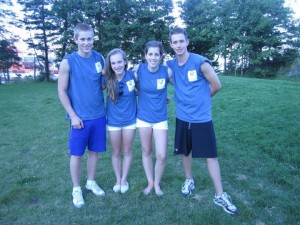 Sadly, the week had to come to an end. Since the rest of the team had to fly out at 1:00pm, they left earlier than everyone else. It was like a shock for me not to be leaving first, because usually I am the first one gone. We ended up being on the ice when they were getting ready to leave so everyone from our group came in and wished them safe flights and gave everyone hugs. Of course, I got a big hug from each and every one of them before they left. It was so weird that when they left I wasn’t going with them. I actually turned around and started crying! It was a very big realization for me to not be going home to the Island with my team. Usually at Whitecap, my regular team jumps in a van or a couple of cars together and leaves. About two weeks later, we start the season together. This can’t happen with my new Youth Olympics team, though. We weren’t all going to the same place where we could start competing and practicing together. The next time I will see the team is at the end of September. We’re all going to Vancouver and I am so pumped! Before this whole Olympic team happened, the furthest west I had ever been was Ontario. So far I’ve been to Alberta and Saskatchewan, and will be flying to BC and Manitoba as well – almost all the provinces! I am very excited about seeing the team again, and getting on the ice with them! Honestly, my team has become my family, and it’s going to be hard in January saying good-bye to them, knowing I might not see them for a long time. But, I know I have made life-long friends in my teammates Corryn, Thomas and Derek and I know that I will see them again, hopefully at national championships, within the next couple of years. But for now, I have my sights set on Vancouver, and the countdown is on!