The season-long Closest to the Pin contest sponsored by the 2012 Ford World Women’s Curling Championship came to an exciting conclusion September 8th for the Henderson Lake Golf Club Ladies League. The 18 weekly winners gathered at the club for a “Shoot Out” to decide the grand champion.  The shot of the day came from Marie Uyesugi with a chip of 71.5 inches from the pin to win a Double Impact “Opener” package including a pair of tickets for the first 11 draws. 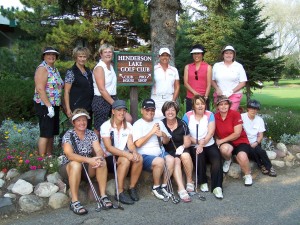 The finalists in the 2012 Ford World Women's Curling Championship Closest to the Pin contest gather for the "Shoot Out" to decide the winner of the Double Impact "Opener" ticket package. (Photo: Lindsey Kruschel)

Host Committee Chair Jody Meli will present the prize voucher October 14th at the league’s closing banquet, along with a full presentation on the world championship and the great selection of ticket packages currently available to fans. It was a busy day for the volunteers as the promotions team was also on the scene September 8th for the Lethbridge Curling Club’s returning members pre-registration and the open registration and barbecue September 9th. With the new season just around the corner, the timing was ideal for spreading enthusiasm within the curling community for the 2012 Ford World Women’s Curling Championship. The promotions drive continues with appearances scheduled for the Lethbridge Curling Club Swing & Sweep Bonspiel September 23 – 25, the Coaldale Granite Curling Club Open House September 30 and the Taber Curling Club Open House October 4 – 5. “You Gotta Be There” to see the world’s elite curlers on the ice March 17 – 25 at the ENMAX Centre.  Pick your seat for all the action by clicking here.