Around the House: How curling came to Maniwaki, Part One

Stepping inside your curling club for the first time this season is like coming home, right? Curlers in Maniwaki, PQ, are enjoying a different experience than most curlers across the country. When the first rocks of the first leagues of the season start sliding down the ice of their brand new curling facility, the members of the Club de Curling Valleé de la Gatineau (Gatineau Valley Curling Club) will be celebrating the end of a journey that started almost 12 years ago. It was in 1999 that curler Reginald Bouchard moved to Maniwaki from Northern Quebec and discovered that his new town had no club. Getting right to work, Reginald approached the town council and with the support of a local councilor, convinced them to allow curlers to use the arena ice on Monday afternoons. A great start – but curling was limited to mostly retired male curlers using rocks borrowed from the Amos club in the Abitibi region. 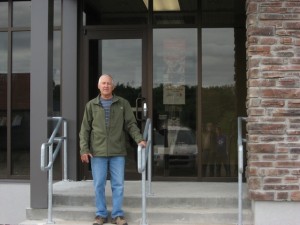 Thanks to Bouchard’s efforts, demand grew (of course!) and playing time expanded to include Monday evenings. But the challenges grew as well. As club manager Terry Tims explains: “The main challenge in the beginning was ice preparation. Hockey played late into Sunday night. Club members had to go in afterwards and flood the ice. In the morning a couple of other members would go in to pebble and set the hacks.” But that wasn’t the only challenge, according to Tims.  “The arena’s water came directly from the river and had very fine sand in it. Imagine trying to get any speed on this type of surface. Add uneven ice, uneven temperature and humidity. It was fortunate that most players had never played on real curling ice or they would have quit.” Also, the rental fee had to be paid to the town, which meant finding more members in order to keep the cost down. But curlers kept coming, despite the challenges. By 2003, there were 80 curlers and the demand for ice time was growing. And that’s when the idea of a new building, a dedicated curling facility, was born. A great idea, right? Absolutely – but not so fast. Curling facilities aren’t built in a day, a season, or even a year. “A committee was formed with Reginald, Peter Provost [one of the club’s best players] and Gaston Robitaille, and commissioned to … gather information as to how to obtain financing for a curling facility,” Tims explains. “They visited several clubs and met with both the provincial and federal MPs. They were encouraged to pursue the project.” And so the process began. Research at other clubs. Discussions and negotiations with government officials. Concentrated fundraising efforts. The Local Area Development Office (CLD) got on board and agreed to help prepare the necessary documents required by various government departments. An architect drew up preliminary plans for a two-sheet club with an estimated cost of  $1,112,000. Two club members, Lucien Desnoyers and Paul Lafrance, took on the role of finding the money – efforts by two men, says Tims, to whom the club owes a huge debt of gratitude. By 2004, an Ice King had been purchased, plans were ready, money was raised, and everyone was on board. Maniwaki was finally on the verge of having its own curling club. “Members at this time were looking forward to a facility in the near future,” says Tims. But Maniwaki’s curlers would have to wait seven long years. Next week: Keeping their eyes on the broom, the founders and supporters of the Club de Curling Valleé de la Gatineau (Gatineau Valley Curling Club) never gave up.