A Busy Summer Comes to a Close in the Kootenays

The Paint the Town and Community Events teams have been hard at work through the hot days of summer to promote the 2011 Capital One Canada Cup coming to Cranbrook this fall. 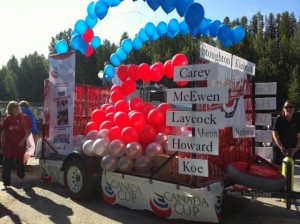 The 2011 Capital One Canada Cup float was one of the more colourful entries in the Kimberley JulyFest parade. (Photo Brenna Baker)

The volunteers were there to accompany the Canada Cup float in the 39th edition of the Kimberley JulyFest parade, man the event booth at the Oilmen’s Golf Tournament banquet and greet the crowds for the Kootenay Country Fair in Fort Steele Heritage Village. Just over two months remain before the Season of Champions launches its opening event of the year… and the momentum is building! The promotions team will be right back on the job during the Cranbrook Chamber of Commerce “Small Business Week” and Kootenay Ice Western Hockey League games in the Cranbrook Rec Plex – where the country’s finest men’s and women’s curlers will compete for the 2011 Canada Cup. And, you can “read all about it” with weekly team profiles running in the Cranbrook Daily Townsman along with ads in the SNAP East Kootenay news publication. But “You Gotta Be There” to experience the thrill of live championship curling, November 30 – December 4.  Click here to get your tickets now.