The first Volunteer Rally for the 2012 Tim Hortons Brier was held September 15th at Saskatoon’s Sutherland Curling Club, and based on the tremendous turnout, the excitement is clearly building for the upcoming men’s national curling championship. A total of 1,100 people have signed up to take part in the Brier and 835 of them were on hand to receive their assignments, meet their directors, get fitted for volunteer uniforms and have photos taken for official accreditation. 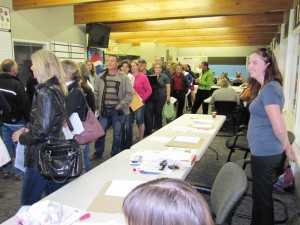 Volunteers for the 2012 Tim Hortons Brier were out in full force September 15th at the Sutherland Curling Club. (Photo: Rob Dewhirst)

“The response has been remarkable,” said Barry Whitehouse, Vice Chair of Volunteers.  “To see that many come out for the rally just shows how much enthusiasm there is in the community.  We received hundreds more applications but right now we just don’t have positions for everyone.  We’re keeping their names on a waiting list and will contact them as the need arises.” The Brier returns to Saskatoon March 3 – 11, 2012 at the Credit Union Centre – the sixth time the city has hosted the event.  Attendance records were set in both 1989 and 2000, and Saskatoon still holds second spot in all-time attendance.  With recent expansion of the arena, there’s growing anticipation for another record-setting year! “You Gotta Be There” for one of the biggest events on the Season of Champions calendar.  Great seats are available just by clicking here.