Brier History in the Making for Saskatoon?

The year 1989 was a memorable one for Saskatoon and the sport of curling as the city prepared to host its third Brier championship in the newly constructed Saskatchewan Place arena – and the event lived up to all expectations. 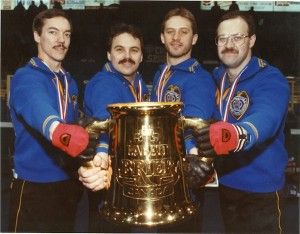 A new attendance record was set with crowds totaling 151,538 filling the stands to see Alberta’s Pat Ryan lead his “Ryan Express” to a second consecutive Brier victory, taking down B.C.’s Rick Folk 3-2 in the final. Folk – a transplanted Saskatooner – was clearly the hometown favourite but the precise up-weight peels from the Alberta foursome proved to be the deciding factor in the outcome.  The low-scoring match became one of the leading arguments for proponents of the Free Guard Zone rule that ultimately revolutionized the game. The Tim Hortons Brier is back in Saskatoon March 3 – 11, 2012, in the venue that is now known as Credit Union Place with a seating capacity expanded to accommodate several thousand more fans.  It’s the sixth time Canada’s national men’s curling championship has been held in the city… and all signs suggest another history-making year! “You Gotta Be There” to experience the drama and excitement of live championship curling.  The best seats in the building are available now by clicking here.