Season of Champions events present the elite players in the world bringing their amazing skills to fans across the country.  And, the Junior Stars program is an integral part of every championship – including the 2012 Ford World Women’s Curling Championship in Lethbridge. The program provides young champions of the future the opportunity to experience a taste of competitive curling at its very best… and meet with the biggest names in the game! If you’re a junior curler at a club in the Lethbridge region, you can apply online by clicking here. All it takes to enter is a 100-word story explaining why you want to be one of the Junior Stars when the competition gets under way March 17 – 25 in the ENMAX Centre. 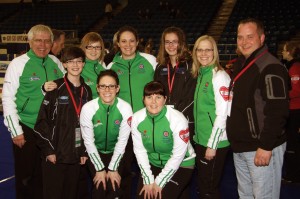 Saskatchewan's Team Holland with their Junior Stars at the 2011 Scotties Tournament of Hearts. This year they'll be part of the field at this year's Capital One Canada Cup of Curling. (Photo courtesy Charlottetown Scotties event team)

Winners become honorary members of one of the teams competing in the championship and receive: • a commemorative Junior Stars jacket • a ticket for you and two parents/guardians to the draw when your team is highlighted • an event pin and souvenir program • an official photograph with the team But the best part is you’ll have the chance to meet the team, observe them from ice level in practice, take part in a special pre-game ceremony… and go behind the scenes to meet the TSN broadcast crew and production staff. The winners will be selected December 20th, 2011 and notified the following day. “You Gotta Be There” to see the best in the world – whether you’re a Junior Star or a seasoned veteran!  Click here to get your tickets now.