The “New” ENMAX Centre is Ready to Welcome the World

When the 2012 Ford World Women’s Curling Championship hits the ice March 17 – 25 in Lethbridge, competitors and fans alike will get their first look at an amazing new facility. 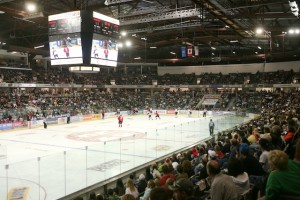 The ENMAX Centre may not be new in the true sense of the word, but the $34.5 million dollar renovation project that’s been underway over the past two years certainly gives it that feel. The city’s sports and entertainment complex – home of the Western Hockey League’s Lethbridge Hurricanes – has undergone a dramatic overhaul that includes expanded seating, new dressing rooms for the athletes and a state-of-the-art video scoreboard and audio system to enhance the fan experience. Anyone who was in the stands when the venue hosted the Scotties Tournament of Hearts in 2007 will have a hard time believing they’re back in the same building. The ENMAX Centre is presently in use while upgrades continue.  The project is scheduled for completion in the spring of 2012 and the world women’s curling championship will be the feature event to mark the official grand re-opening. “You Gotta Be There” to see the best in the world compete in this world-class arena!  Just click here to get your tickets now.