Pebbles to Boulders: From Nobleton to the World

In our hockey-mad nation, there are hundreds of stories told about hockey stars coming from small towns and making it in the big leagues. But I’m about to tell you a similar story, and this time it’s the story of a curler. 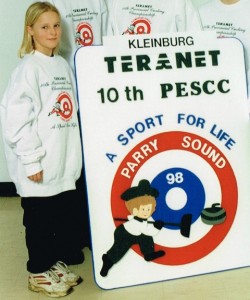 Nobleton, Ontario, is a small town, a crossroads north of Toronto in King Township. Nearby, Environment Canada has located one of its weather radar station outposts, with the big white dome, looking for weather systems which could affect our day. One reason I had not heard of Nobleton is that they do not have a curling rink. If you are a curling volunteer and wonder sometimes why you dedicate so much time to make curling happen at your club, this story will provide one of the answers.
Without a curling facility of its own, the Nobleton Curling Club uses the local hockey arena every Thursday night so that curlers can get their curling fix. This is where our story begins: Little Rocks curling on arena ice and Danielle Inglis. Coming from a curling family, Danielle threw her first curling rock at age seven. She began in organized curling with Little Rocks as part of the Nobleton Junior Curling Club, which had five sets of the early Little Rocks. Adults used stones topped with the old metal gooseneck handles. (There are a couple of generations of curlers who have never seen a gooseneck-handled rock on the ice surface, only seen these days sitting on the hearth beside the fireplace.) The Nobleton group of 7- to 12-year-olds was a fairly active bunch of 30 to 35 kids. Etched in Danielle’s memory is how the instructors taught the basics of curling and made curling fun. “I don’t remember ever having a day where I didn’t want to go back for another day of curling.” 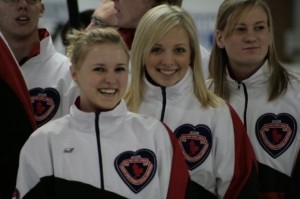 Sportsmanship was one of the fundamentals. Instructors showed the youngsters where to stand and how not to be a distraction to the opponents. Christmas time was always fun, using frozen Cornish hens to throw closet to the button. Early on, the kids learned concentration and avoidance of distraction techniques by use of a drill that was made into a game. The coach would ask the curlers to close their eyes and think of nothing but an orange. The curler who could concentrate the longest, won. Playing in an arena, Danielle learned early that curling ice is not necessarily perfect, due to the ever-changing hockey ice. “You always had to look for where the Zamboni lines were on the ice that week.” Traveling to Little Rock spiels was fun. Danielle remembers going to the prestigious Granite Club in Toronto. “They had bowling and skating between games and the best make-your-own ice cream sundae bar. We wanted to go back every year.” 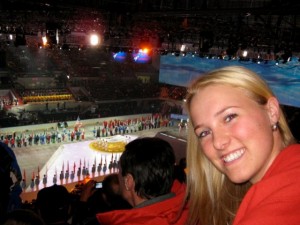 From these humble and yet influential beginnings in Little Rocks, where did Danielle eventually go? This young lady has already had a distinguished career, having played in numerous bantam, junior, mixed, high school, university and one Scotties provincials. In three of four years at high school, Danielle qualified for OFSAA and Gore Provincials, winning a 2006 OFSAA championship in Grade 12. She won the Ontario Juniors in 2008 to represent Ontario at the nationals. She was a two-time Canadian university (CIS) champion in 2008 and 2009, and a silver medalist at the 2009 World Universiade (World University Games) in Harbin, China, going through the round robin undefeated, only to lose the final to the famous Bingyu Wang of China by a score of 6-5. Then in 2010, she represented Canada in Japan at the Karuizawa International Curling Championships, capturing the gold medal with a 12-11 shoot-out win over Sweden after going 6 and 1 through the round robin.
From humble Little Rock curling beginnings on arena ice in Nobleton, to being a champion several times, to twice traveling halfway around the world to Asia, representing Canada: this is Danielle Inglis. Small town curling gal making it big – and she’s still very young with a long curling career ahead of her.
As a curling club volunteer in Nobleton, working so hard to make curling happen each Thursday night on arena ice, your efforts have paid off for this young lady who has never forgotten her curling roots. If you know of a Little Rock curling program or a special Little Rocker who has a story to be told, I would be thrilled to hear from you. Contact me by email at [email protected].