Sponsors Hard at Work to Support the Scotties

So many people play a part in the success of Season of Champions curling events – ranging from the athletes and fans to event organizers and thousands of volunteers. But the role of our sponsors should never be understated. 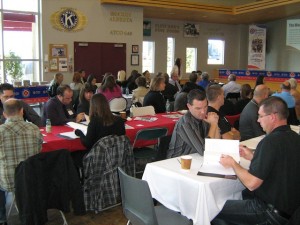 Sponsors for the 2012 Scotties Tournament of Hearts had a full day October 13th at a workshop hosted by the Alberta Sports Hall of Fame. (Photo: Mandy Carroll)

That fact was clear October 13th when the Sponsor Workshop for the 2012 Scotties Tournament of Hearts took place at the Alberta Sports Hall of Fame in Red Deer attracting a group of 53 sponsor representatives. The workshop was led by Kathryn Larsen, Manager, Local Sponsorship, with the support of Trina Joly, Mandy Carroll and Dixie Lorentz from the Scotties event office, along with Host Committee Chair Sherri Ryckman.  The focus for the day was a review of the rights and benefits of sponsor agreements and sizing for official event jackets. The social side of the agenda featured a Hall of Fame tour with a stop at the curling exhibit – complete with a Cool Curling table. Participants also had the chance to test their skills on the Treadwall Climbing Wall and 200-metre virtual wheelchair race. “You Gotta Be There” when the 2012 Scotties comes to Red Deer February 18 – 26 at Westerner Park.  Great seats are still available – get yours now by clicking here.