World Curling is On the Ice in Alberta

The 2012 Ford World Women’s Curling Championship gets underway in Lethbridge  March 17 – 25 at the ENMAX Centre and the signs of excitement are growing across southern Alberta. 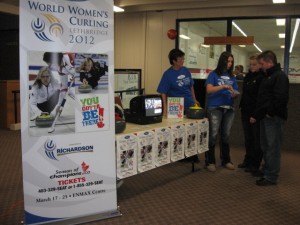 At this time of year the ice surface is just being installed in curling rinks across the region.  But in many, the event logo has already surfaced – just beneath the pebble – serving as a season-long reminder that one of the most prestigious championships in the game is on its way to the city. Initiatives to encourage local clubs to incorporate the logo represents just one facet of the promotional plan to ensure 2012 is remembered as the best year ever in the history of the event. Volunteers have also been on the scene at open house/registration nights in a number of curling clubs including Lethbridge, Taber and Coaldale.  The full-out promotions blitz will continue into November with presentations scheduled for all area clubs. A Cool Shots program – the small-scale version of the roaring game played on shuffleboard-style tables – will also be introduced in coming months. “You Gotta Be There” for the 2012 Ford World Women’s Curling Championship at the ENMAX Centre.  Great seats are available now by clicking here.