Just a little over three weeks ago, the team was back together again in beautiful Vancouver, B.C. It was awesome to see everyone again, and get to have some more ice time. 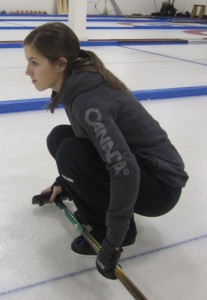 We started off the weekend with practice at the Marpole Curling Club. We spent the majority of the day at the club, and (CCA Director of High Performance Curling) Gerry Peckham even came and talked to us about some different things we might encounter on ice. After that we went back on the ice for a quick practice and then headed over to the mall. We knew we would be needing some sort of Team Canada uniforms for our next competition, and Helen wasn’t sure if we would be getting our uniforms for Innsbruck before our next competition, so what better place to buy Team Canada stuff than at The Bay? We decided to go to the Hudson Bay Company in downtown Vancouver. Wow. It was HUGE! And the selection was amazing. Earlier in the day Gerry had suggested we get Canada Mitts to give out in Innsbruck, so when we got to the store, we filled two duffle bags with probably 30 pairs of the new 2012 Canada Mitts. We then each got a long-sleeved shirt that says CANADA across the shoulder blades, and a sweater that has CANADA down the sleeve. We each tried them on, and they looked great! Now that we’re all matching we are starting to look like a team. Helen even got a matching outfit. Combine all of that with five Canada duffle bags and that ended our shopping spree at HBC. When we got to the checkout, the cashier asked if we were from Vancouver, because if you ‘come from away’ then you get a discount. When we said no she looked at Helen and asked if we were all hers! That caused some good laughs. We explained who we were and why we were in Vancouver. That cashier was the most excited person I had seen all night. She was so excited to meet us. Things like that make me even more excited for the Games! 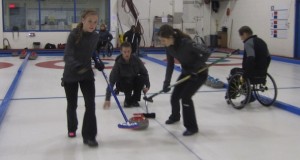 The next day we had an early morning game against the National Wheelchair Team. It was a close game but we pulled it out in the end and won by a mere point to continue our undefeated streak. After that we headed over to the Richmond Curling Club to introduce ourselves to more wheelchair curlers who were participating in a camp, try on some curling pants and have some ice time. We also met with a sports psychologist who got us to do some fun little games, like a name/colour game, an exercise where we had to let go of a pen and catch the next person’s before theirs dropped, and balancing 12 nails on one. Thankfully, Thomas had done the nail exercise before and had an idea of how to do it. If not, we would probably still be sitting on the floor looking at it and trying to figure out how it works. Our weekend training was done. We still had some free time on Saturday night, so we decided to go bowling. It was a great time! I had never been 10-pin bowling before so it took a few throws to get used to it. It wasn’t so bad once I found a bowling ball that didn’t weigh 50 pounds so I could actually pick it up! After bowling we did some fun little arcade games and then headed back to the hotel. Everyone left Sunday morning. I think Thomas was the most excited to leave. Throughout the weekend his home club had finished putting in its ice, so he just jumped right off the plane and headed to the curling club for some practice time. The important thing is that everyone got home safe once again Since the Vancouver trip, I have been focused on school and training. However, I am both pretty excited and not looking forward to the upcoming days: I am having my first radio interview this week so I am really pumped for that, but an hour after that is over, I get my wisdom teeth out. The team will be together again in about two weeks in Ottawa, Ontario, for the OVCA Superspiel. We will be competing on the men’s side and hopefully come out with the wins to continue our undefeated record!