Since 2005, when she started blind curling in Regina, 20-year-old Natasha Achter has been accumulating trophies and titles. That first season, her team made it to the Blind Curling National Championship in Ottawa, finishing third, and Natasha’s performance earned her recognition as Athlete of the Year for the Saskatchewan Blind Sports Association (SBSA). 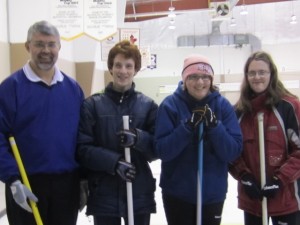 Originally a lead, Natasha began skipping in 2007. Although her team finished at the bottom of a three-team league that first season, they rose to the challenge and took home the league’s Grand Aggregate Trophy twice, in 2009 and 2011, as well as the City Championship Trophy for playoffs in 2009-2010. Natasha’s on-ice accolades include MVP status at the 2008 and 2009 Western Blind Curling Championship, an event she attended in 2011 with a team made up of players under the age of 30. “I was very proud of them,” she says about her most recent trip to the event. “This was only our second Western Championship as a team.” Currently playing out of the Callie Curling Club and Highland Curling Club in Regina, Natasha also plays lead in non-visually impaired leagues as well as curling for Saskatchewan Blind Sports. Birthplace:  Regina, SK Hometown:  Regina, SK Curling Club:  Caledonia (Callie) Curling Club and Highland Curling Club Current Team:  SBSA Team Achter Position:  Skip Delivery: Right Nickname:  Nash   Quick Hits with Natasha Achter Do you have any superstitions? “Yes I almost always have to wear my lucky pink toque. I just seem to win more with it than without it.” Three people, living or not, whom you would invite to a dinner party. “Kevin Martin, Abe Lincoln, and Rachel Ray to cook the food.”  If you could be a star in any other sport, what would it be, and why? “Hockey, because I used to skate but was never that capable to play other than with my brothers.” If you could change any rule in curling, which one would it be, and why? “If I could change one rule it would be that we would be able to hit the boards, so that almost every rock is in play and this would make it so much easier for two reasons. One is that it would be easy to learn and two it would keep more of the totally blind curlers’ rocks in play.” What music do you like to listen to before a game? “Usually it’s just country on the radio in the car on the way to the rink, but last year at Westerns we had to listen to “I Got a Feeling” by the Black-Eyed Peas before every game to get us pumped up.” Favourite: … Website?  “Facebook I guess it’s not my fave, just the one I visit most.” … Order from Tim Hortons?  “Iced coffee in the summer and hot chocolate in the winter” … Vacation destination?  “Maui, Hawaii. Aloha” … Junk food?  “Cheesies!” Do you have any pet peeves? “My third trying to change my mind (lol)! And when they say “Oh!” when the shot I called works. Just kidding. I don’t really have any.” Three things you always travel with? “My iPod touch, money, and good people to accompany me.” First thing on your Bucket List? “To go to Hawaii – but crossed it off the list February 2011.” Favourite pastime between draws? “Listening to music and visiting with people. Also we usually spend some time talking about our pros and cons of the previous game, i.e. what we did well and what we could improve on.” One thing most people don’t know about you? “That I love most water sports. I like fishing, kneeboarding, surfing; love snorkeling, rowing; would love to try kite boarding. I am not a big fan of tubing or wakeboarding. I have tried water skiing but failed miserably.” What is the biggest misconception about curlers? “That curlers are all old.” Your ideal shot to win an Olympic gold medal: “Guard raise takeout to win the game by two.”