Around the House: The Windsor Curling Club rises from the ashes

It’s the nightmare that no curling club ever wants to experience: on September 25, 2007, the Windsor Curling Club in Windsor, Nova Scotia, burned to the ground. 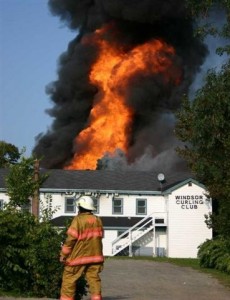 Rae Winkelaar was club president that season, and he had just been chatting to technicians about the recently completed $17,000 refit on the refrigeration plant. As they were locking up, Winkelaar noticed smoke coming from the back of the building. “An old shed on the next lot was in flames and the heat was buckling the vinyl siding on the curling club wall,” describes Winkelaar. “A call to the fire department soon brought the sound of sirens, but once the end of the wooden ice shed caught, the structure began burning, like a fuse, from one end to the other.” Newspaper reports of the day describe flames shooting 50 feet in the air The club was “a goner,” remembers Winkelaar, so the firefighters turned their attention to wooden buildings on adjoining properties, trying to prevent the fire from spreading to homes in the neighbourhood. When the danger was over, the Windsor Curling Club was left with “a heap of burnt wood and blackened metal, shattered curling rocks – and a bill for $17,000.” But there in the charred remains of their club, they found a nugget: “A cash box,” says Winkelaar, “containing a very wet $650 that had been collected from the sale of fudge at Windsor’s fall fair.  This was the beginning of our fundraising for a new rink.” 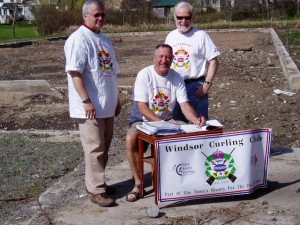 Like many small facilities across the country, the Windsor Curling Club is run by volunteers, and they weren’t about to give up on curling in their town. They needed a new facility, and they were determined to build one. “A building committee was struck consisting of a mixture of able people – engineers, a contractor, retired service personnel, a business man, a teacher.  Due diligence was a concern with emphasis placed on selecting an appropriate contractor and whether we should relocate,” says Winkelaar. The insurance would help, but it wouldn’t cover the entire cost of replacing the building, so the committee decided that purchasing new land would be too expensive. The new club would be built on the site of the old.  The Windsor Curling Club would rise from the ashes. Consulting with club members was a priority. Feedback received from general meetings held to hear what local curlers wanted was simple: members wanted to be curling as soon as possible, and they wanted the club to remain as a unique, independent organization. In other words, despite the financial attractions of partnering with another organization, they wanted their club to be autonomous. So the fundraising began. 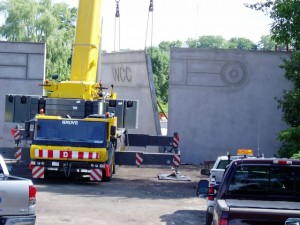 “Concert to kickstart curling club fundraising campaign!” proclaimed the headline of the local Hants Journal newspaper on November 22, 2007. Barely two months had passed, and the “Raise the House” campaign was underway. “Fundraising included a gala, a musical benefit, a golf tournament, many draws and private contributions,” says Winkelaar.  “All the curling stones were paid for by club members and local organizations.” The Nova Scotia provincial government stepped up with grants through Health Promotion and Protection. Green initiatives by the builders, Dartmouth contractors Lindsay Construction, also helped: energy-conscious features, such as an HVAC system that uses heat from the ice-making process to keep the floor warm in the viewing area, brought in grants from the Department of the Environment. Financial donations and grants were certainly a large part of the process – Winkelaar believes the “sympathy factor, that is, being destroyed by fire” worked in favour of fundraisers. And curlers were able to stay active during the 2007-2008 season by using ice time donated by generous neighbouring clubs such as Wolfville, CFB Halifax, Glooscap and Chester. But it took more than money to rebuild the club. It took people. Winkelaar attributes the success of the rebuilding process to three factors: “A cooperative spirit; the utilization of the knowledge and skills of those involved; and, the deep desire or ‘will’ to rebuild.” When the first rocks were thrown in October 2008, a mere 13 months after the fire, Windsor Curling Club members celebrated not just a welcome return to curling together in their brand new facility, but another milestone as well: the 2008 season was the club’s 100th Anniversary. “Our rebuilding success depended on having a cooperative, experienced, enthusiastic group of volunteers serving on committees and on the board,” says Winkelaar, “plus a community of curlers dedicated to the game and to the continued existence of the Windsor Curling Club.  May the game of ‘bissoms and stanes‘ live on.”