Julie Skinner (nee Sutton) appeared on the Canadian curling scene in 1986, when she and her twin sister, Jodie, captured the Canadian junior women’s title in Noranda, Quebec. 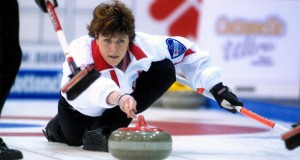 Julie Skinner at the Scott Tournament of Hearts (Photo: CCA)

The British Columbia team — with Jodie skipping, Julie as vice skip, Dawn Rubner at second and Chris Thompson at lead — defeated Newfoundland’s Jill Noseworthy in the final. Skinner was back at the nationals in 1987, this time on the teehead. She romped through the field with a 9-1 round-robin record and then downed Manitoba’s Karen Purdy 5-4 in the final. At the worlds in Chamonix, France, the B.C. foursome won the first-ever world junior women’s title with a 6-4 decision over Switzerland’s Marianne Amstutz in the final. Skinner made the transition from junior to women’s curling in record time and skipped British Columbia at the 1989 Scott Tournament of Hearts in Kelowna. The team finished the round robin in a five-way tie for second place with a 7-4 record, behind Manitoba’s Chris More. In the ensuing tiebreakers, Skinner ousted New Brunswick’s Heidi Hanlon before losing to Michelle Schneider of Saskatchewan. Two years later, Skinner was back with a new team — sister Jodie at third, Melissa Soligo at second and Karri Willms at lead. They sailed through the round robin with a 10-1 record, earning a bye to the final. Trailing New Brunswick’s Hanlon 5-2 after seven ends in the final, the B.C. squad hit for deuces in the eighth and ninth ends and a single in the 10th to win 7-5. Skinner journeyed to the world championship in Winnipeg, where she met Norway’s Dordi Nordby in the final. Nordby emerged with a 4-3 victory and her second straight world title. 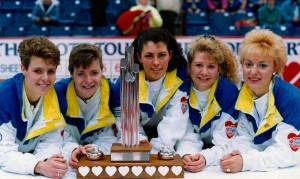 Curling was a demonstration sport at the 1992 Olympic Winter Games in Albertville, France, where Skinner’s 1991 Hearts champions represented Canada. Skinner lost a semifinal to Nordby, who then lost the gold-medal game to Germany’s Andrea Schöpp. Skinner won bronze with a 9-3 decision over Denmark’s Helena Blach (Lavrsen). Skinner’s outfit returned to the Hearts in 1992 as Team Canada and finished in a three-way tie for first with Manitoba and B.C. They were awarded top spot but lost to Manitoba’s Connie Laliberte 7-3 in the final. They won B.C. again in 1993 but slipped to a 6-5 finish at the Hearts. Skinner then spent several years out of the spotlight, during which she married. Then, in 2000, Kelley Law of New Westminster put together a new team with Skinner at third. They won the provincial Hearts in grand fashion and caught fire at the Hearts in Prince George, winning six straight, including the final two round-robin games, a tiebreaker, a Page playoff game, a semifinal and a final-game victory over Ontario’s Anne Merklinger. At the worlds in Glasgow, Scotland, that year, Law and her mates were tied for first with none other than Norway’s Nordby at the end of the round robin. In the semis, Law downed Scotland’s Rhona Martin 10-7, while Nordby lost to Switzerland’s Luzia Ebnöther. Canada had some anxious moments in the final against the Swiss, but in the end managed a 7-6 victory to win the world crown. The 2001 Hearts was held in Sudbury, Ontario, with Law and her mates returning as Team Canada and successfully capturing first place at the end of the round robin. Law faced Colleen Jones of Nova Scotia in the final and, with the score tied after regulation, it took an extra-end measure before Jones was pronounced the winner. The next stop for Law and Skinner was the Canadian Curling Trials in December 2001 in Regina. Law dominated the round robin, finishing in first place with a 7-2 record. In the final against Sherry Anderson of Delisle, Saskatchewan, Law hit for a deuce in the fifth end and a 3-2 lead, then stole one in the sixth and two in the seventh and cruised to a 7-3 win. It was business as usual for the Law squad at the 2002 Olympic Winter Games in Salt Lake City, Utah, where it lost only once in the 10-team round robin. But then it suffered a 6-5 upset to Great Britain’s Rhona Martin in the semis. Law’s team bounced back the next day with a decisive 9-5 win over Kari Erickson of the United States to capture the bronze medal. The following year, 2003, the team lost the provincial final and Skinner retired from competitive curling to spend more time with her family. When the Scotties Tournament of Hearts was held in Victoria in 2009, she was a member of the executive committee.