The Battle’s Underway to Wear Green in Saskatoon

The 2012 Tim Hortons Brier will be contested March 3 – 11 in Saskatoon’s Credit Union Centre…. that much we know for sure.  But the question of who will be curling in home-province colours is still to be decided.

Normally, Pat Simmons would be the odds-on favourite after skipping his way to five previous Briers.  But Simmons moved on to play third for Alberta’s Kevin Koe this season so he’s definitely out of the mix. 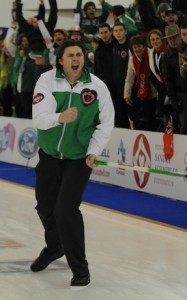 That makes Steve Laycock the front-runner in the early stages of the race.  After throwing third stones for Simmons in London at the 2011 Tim Hortons Brier, he’s moved up to skip with Brennen Jones and Dallan Muyres back on the front end and Joel Jordison coming on board at third. Another name to watch is Rosetown’s Carl deConnick Smith who made it to the final in last year’s Saskatchewan Tankard Playdowns – and has been strong out of the hacks this year, reaching the quarter-finals in a tough field at the Westcoast Curling Classic. Two-time Brier representative Scott Bitz, a force on the competitive circuit since winning the province’s junior title in 1992, is also off to a great start to the new season. But, in a province so rich in curling talent and tradition, you know there are a lot more challengers out there!  The likes of Randy Bryden, Mark Herbert and 2011 Canadian junior champion Braeden Moskowy are ready to fight for that cherished spot in a Saskatchewan Brier. “You Gotta Be There” to see who marches proudly onto the ice wearing the traditional Saskatchewan green.  Make sure you get your tickets now for the 2012 Tim Hortons Brier by clicking here.