Team Canada continues its preparation for the 2012 Youth Olympic Games next February by competing in this weekend’s 18th Annual OVCA Junior Superspiel in Ottawa, Ontario. 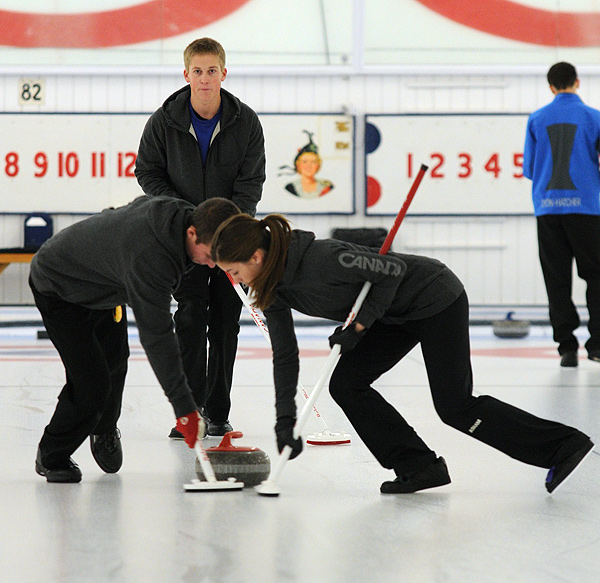 The team – skip Thomas Scoffin of Whitehorse, Yukon; third Corryn Brown of Kamloops, B.C.; second Derek Oryniak of Winnipeg, Manitoba; and lead Emily Gray of O’Leary, P.E.I. – was announced last April during the 2011 Men’s World Curling Championship in Regina, Saskatchewan, and since April, these four young curlers have been training both on and off the ice. The OVCA event is the next step in the team’s preparation – competing in the men’s draw against top-flight junior curling teams across Canada and including several international entries. Their first game on Friday, November 4, at RCN (Navy) saw Team Canada come out strong against a Nova Scotia foursome skipped by Stuart Thompson. They applied pressure during the first four ends, but fell behind when the opposition took control with a deuce in the fifth end and a steal of two in the sixth. “Team communication and sweeping was great,” reports coach Helen Radford after the 6-4 loss. “Both teams played really well.” In the afternoon game, a big score of three by Huntley’s Brett Lyon-Hatcher in the sixth end made it close. Team Canada blanked the seventh and needed a deuce in the eighth to win. With a lot of rocks in play, skip Thomas Scoffin made a great runback to lie two on the four foot, but Lyon-Hatcher made a perfect freeze on his final shot.  When Scoffin’s run-back attempt just missed picking out the opposition’s stone, the game ended in Lyon-Hatcher’s favour at 7-5. The team plays its third game Friday night at the Granite Curling Club, at 8:30 p.m., and action continues Saturday in curling clubs around Ottawa.