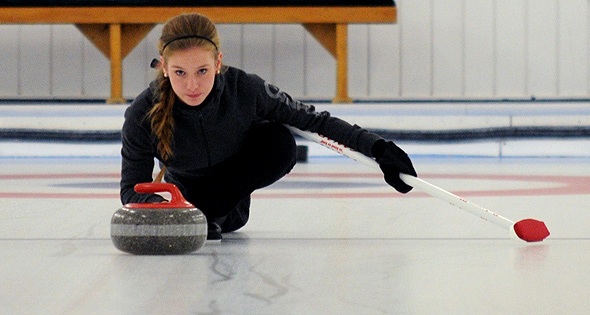 Junior curlers Thomas Scoffin, Corryn Brown, Derek Oryniak and Emily Gray, playing in their first competitive event since being named to Team Canada last April, emerged from day one with three losses after three close games. Coach Helen Radford says that the team – still new to each other in a game situation – continues to improve and develop. “Team chemistry has been excellent,” she says, “and they are really starting to work together.” Today, a determined Team Canada hit the ice at Carleton Heights against P.E.I.’s Team Fullerton, scoring one in the first end and a big three in the fourth to take a one-point lead into the second half. Relying on good draw weight and the excellent sweeping of front end Oryniak and Gray, Team Canada held Fullerton to one in the fifth, took two in six and stole another two in seven, earning an 8-4 victory – and a match Sunday morning at 9 a.m. against Navy’s Team Gannon at Carleton Heights. The 2012 Youth Olympic Games take place in February. Since being selected last April to represent Canada on the ice at Innsbruck, Austria, Scoffin, Brown, Oryniak and Gray have been training on and off the ice. “After the game we had an off-ice session with sport psychologist Penny Werthner who reinforced what we are doing well and areas that we can continue to improve upon,” said coach Radford after the team’s win. “We’re looking forward to another game on our journey tomorrow.”