A Match Made on the Ice: Canada’s GLBT community has embraced the sport of curling

In Vancouver, in the early 1990s, the Pacific Rim Curling League — a 16-team league of gay and lesbian curlers — met weekly at the University of British Columbia rink. 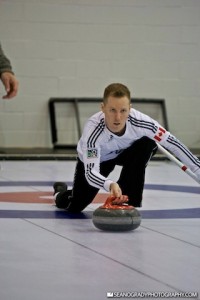 Founded 10 years earlier as an informal drop-in league, the PRCL was the first league for gay curlers in western Canada, and it was growing in popularity — until UBC decided to shut the deteriorating curling facility. At about the same time, the going was rough over at the Vancouver Curling Club. A dwindling membership meant revenue was spiralling downwards and the club’s future looked bleak unless it could bring in new curlers and generate some income. Homeless, the PRCL went looking for ice — and found it at the struggling VCC. Within a year, the Pacific Rim Curling League had grown to include 20 teams and the fortunes of the Vancouver Curling Club had improved dramatically. There were more members, more action, more special events and more money spent on food and beverage; by joining forces, the Pacific Rim Curling League and the Vancouver Curling Club created a win-win situation that continues to this day. The enthusiasm with which the gay, lesbian, bisexual and transgender (GLBT) community has launched itself into curling — and the benefits of that relationship — can be seen right across Canada. Thriving GLBT clubs rent ice time or run leagues, bonspiels and special events at curling facilities in Vancouver, Edmonton, Calgary, Winnipeg, Toronto, Ottawa, Montreal and Halifax, and the website www.gaycurl.ca offers news and resources for GLBT curlers of all levels. “We believe the GLBT community has wholeheartedly embraced curling,” says Trevor Boudreau, the PRCL’s league representative, citing the many leagues springing up across the country. “Most, if not all, are among the most popular sports leagues in their respective cities and generally have waiting lists year after year,” he says. 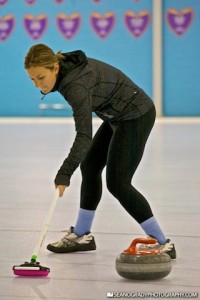 PRCL is a perfect example. Boudreau says the Vancouver gay curling league is one of the largest recreational curling leagues in British Columbia, with about 212 members and 48 registered teams. It offers several bonspiels during its season, from September to May, and will host the 2012 Canadian Gay Curling Championship in February 2012, as well as its annual Pac Rim Cup Bonspiel, at its new home in Vancouver’s former Olympic Winter Games curling venue. “We’re incredibly pleased with the league’s recent growth to 48 teams,” says Vancouver Curling Club president Scott Allen. “From active participation as board members to coaching our junior members, PRCL curlers have made valuable contributions over the years as VCC members and helped ensure Vancouver’s oldest club had a successful move to our new facility.” Support for GLBT curling stretches from coast to coast Across the country on Canada’s East Coast, Halifax’s Mayflower Curling Club is the hub of an equally active gay curling scene. The number of participants may be fewer, but Curtis Cartmill, who originally got things rolling at the Mayflower in 2006, says the support the club receives from comrades at other GLBT curling leagues across the country is “certainly a motivator.” It also didn’t hurt that when Cartmill moved to Halifax from Vancouver, where he had been a member of the PRCL executive, he brought his curling enthusiasm and know-how with him. What started as a group of gay curlers in the Mayflower’s Friday-night recreational league has transformed into Loose Ends, a small, thriving league. “It’s been a great group,” says club manager Dave Jones. “They rent at least six sheets of ice for 12 weeks, so there is a financial benefit to the club, for sure. They also host the Bluenose Bonspiel over the Labour Day weekend with teams coming from all over Canada. The Canadian Gay Championship will be held here as well, in April 2013. Like any group, they make purchases at the bar, pro shop and kitchen, and a few are also members of Mayflower.” Cartmill agrees. “Our home ice is at the Mayflower Curling Club. It’s great because so many of our members have chosen to participate in many of the club’s regular leagues on Mondays, Wednesdays or Fridays, which boosts their membership numbers.” For the local GLBT community, the social aspect of the game is a draw as well. Says Cartmill: “We had many people in our town try (curling) out and use it as a way to socially connect with people outside of traditional methods of the online dating websites or gay bars scene that sometimes people associate with the gay community.” For Halifax curler Corey Oickle, “the Loose Ends league is a way to curl in a more relaxed environment where the focus is more on the social aspect of the game rather than a competitive aspect.” Like most curlers, the gang at the Mayflower knows how to have a good time. At their first Bluenose Bonspiel on Labour Day weekend in 2010, they couldn’t have foreseen the adventure their event was to become — thanks in part to the arrival of Hurricane Earl, which came barreling through Nova Scotia in the midst of it. “We had world champion curler Mary-Anne Arsenault throw our first stone and a surprise visit from MP Justin Trudeau, because the hurricane cancelled all his outdoor BBQs,” recalls Cartmill. “So he joined us to throw a few stones before the power went out. Everyone was really understanding about the curling interruption that happened when we lost power at the club, and we had an impromptu Blackout Party that was a real hit.” Benefits flow both ways Happy curlers, happy club — the benefits of this partnership between GLBT curling leagues and their home ice are tangible and meaningful to both. 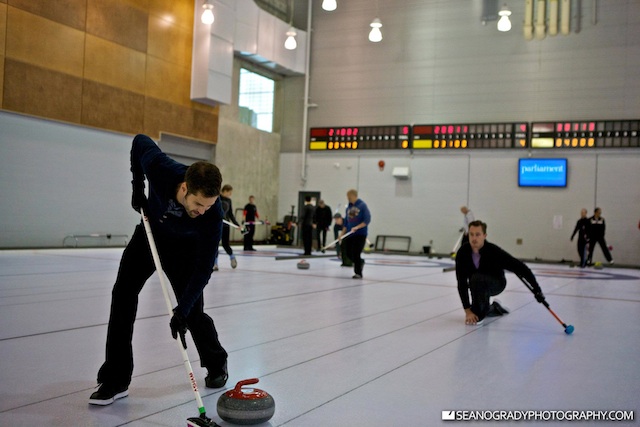 Current PRCL president Jason Tusor sweeps his teammate's rock. After only a year in the league, Jason is highly passionate about the sport and is a self-confessed curling cheerleader (Photo Sean O'Grady)

Joe Pavia, who runs the Hogline Curlers Pro Shop at the Ottawa Curling Club, agrees. The Rainbow Rockers had 32 teams signed up for the 2011-12 season at OCC, says league president Colin Crance, and all of those curlers — many of them newbies — need equipment for the season. “Their bonspiel also brings in many out-of-town players who can’t get equipment in their home towns,” adds Pavia. But the benefits to the club extend beyond sales, Pavia points out. “From an Ottawa Curling Club perspective, many Rainbow league former rookies have liked curling enough to migrate to other leagues in the club and also to other leagues in area curling clubs,” he explains. “They have also increased the business of the club pro for lessons and enrolment in off-ice sessions.” And while club revenue in both food and beverage has increased, thanks to the Rockers’ enthusiastic pre- and post-game socializing, there’s an added benefit: proceeds from the league’s annual Over The Rainbow bonspiel are donated back to OCC building improvements, including a new sound system and new lighting in the viewing area. “Sunday was traditionally a difficult day to book the curling club,” says Crance. “Our league filled that void starting with one time slot and now we are up to three. We are a very social league and participate fully in the curling tradition of after-game socializing.” Pavia says the Rainbow Rockers have brought “a different vibe to the club, making the club open to all people.” High-performance curling opportunities beckon GLBT curling leagues are successfully making the sport more accessible to their own communities, but beyond social curling the challenges remain. 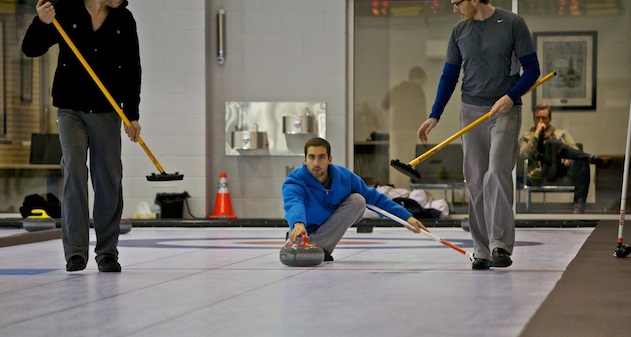 Skip Stephen Bailey has curled for more than 16 years and competed in several bonspiels, including the 2011 Canadian Gay Curling Championship in Ottawa (Photo Sean O'Grady)

PRCL’s Boudreau sees a shift in the way gay curlers are perceived by the larger curling community, but change is coming slowly, even though the Vancouver league has been in action since the 1980s. “Over the years, other players have accepted our teams as respectable curlers and not the gay team that appears from time to time,” says Boudreau, pointing out that three different gay teams in the Lower Mainland won zone spots in B.C. provincial playdowns. “As in any sport, the concept of being gay and being able to perform at a certain level has improved with the acceptance of the lifestyle and image of gay people in sport,” Boudreau says. But he feels the challenge still remains to crack that high-performance barrier. “The one opportunity that still presents itself is to remove the stigma of gay curling, especially at a high level of play. It has always been a very difficult clique to penetrate, and being gay has made it more difficult, in my opinion, to be approached by other competitive curlers due to fear of association.” Pacific Rim curlers are helping to knock down those barriers, Boudreau says, and they’re also expanding the appeal of curling to all levels of the sport. “Movement is being made, thanks to our competitive curlers, and the PRCL league has enabled many curlers to experience the sport in a comfortable setting and to allow themselves to be themselves.” A safe and accepting environment 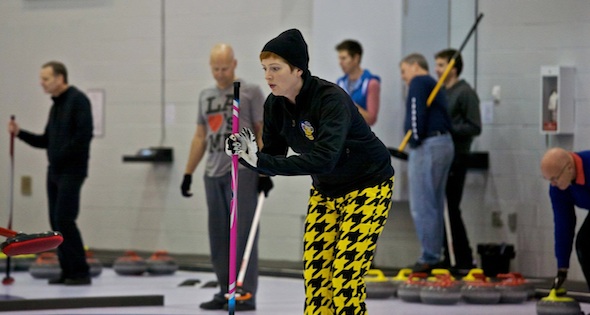 The GLBT community is embracing the sport of curling and the sport is starting to take notice. Curling clubs benefit from the enthusiastic participation, growing membership numbers and contributions that gay curlers are making on and off the ice. And the curlers themselves are benefiting from what Rory MacDonald, club secretary of the OCC’s Rainbow Rockers, calls “a safe and accepting environment.” Back in Vancouver, Boudreau agrees. “The VCC has always been extremely open to our league and accepting of our colourful bonspiel Saturday-night celebrations.” PRCL members are included as part of the club, he says, and not just as “an outside league that brings in cash.” “I feel so at home in the Loose Ends league,” says Halifax’s Oickle. “And I also love the fact that we are able to introduce such a great winter sport to so many newbies, be they part of the GLBT community or not.” Jean Mills is a Curling.ca Writer and Web Editor