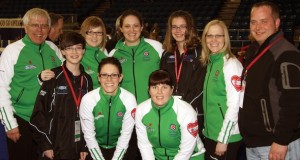 Saskatchewan's Team Holland with their Junior Stars at the 2011 Scotties Tournament of Hearts. This year they'll be part of the field at this year's Capital One Canada Cup of Curling. (Photo courtesy Charlottetown Scotties event team)

They were selected as honorary members of the teams competing in the Canada Cup after submitting a 100-word story outlining why they want to be one of the stars.  Each will receive: • A commemorative Junior Stars jacket • Tickets to the draw when their team is highlighted as well as draw tickets for all immediate family members courtesy of Columbia Basin Trust • A 2011 Capital One Canada Cup Event Pin and Souvenir Program • An official photograph with the team But the best part is they have the chance to meet the team, observe them from ice-level in practice, and take part in a special pre-game ceremony. “You Gotta Be There” to see the stars of the future join the biggest names in the game, November 30 – December 4 in the Cranbrook Rec Plex.  Get your seats today by clicking here.