Another Great Delivery from Jones!

Jennifer Jones, one of the most accomplished curlers of our time, was up bright and early November 3rd to address a wide-awake gathering for the Alberta Sport Development Centre’s annual Breakfast of Champions. 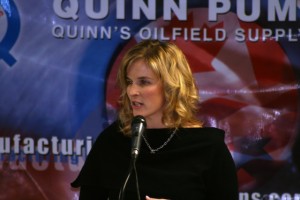 The Winnipeg skip, winner of four Scotties Tournament of Hearts championships, delivered a motivational message to young Central Alberta athletes – encouraging them to follow their dreams and pursue excellence in their sport. The Host Committee for the 2012 Scotties Tournament of Hearts was well represented at Westerner Park along with a number of curling fans, sponsors and media partners. The breakfast was followed by the launch of the new Take 5 Mini Packs for the national women’s curling championship – coming to Red Deer February 18 – 26. The promotions team was back at Westerner Park November 9 – 12 to promote the upcoming Scotties at Agri-Trade – an annual exposition that attracts thousands from the farming community. Appearances are also scheduled for the Festival of Trees Parade November 22nd – with a decorated tree up for sale – the WHL’s Red Deer Rebels hockey game November 25th, and the Bower Mall, November 26th and 27th, to promote the Rocks in Your Socks ticket program. “You Gotta Be There” when all the hard work of the volunteers comes together for the Scotties Tournament of Hearts… don’t wait ‘til it’s too late!  Get your seats now by clicking here.