Around the House: An early-season curling club tour

In some parts of the country the leaves are still falling, and in others, the snow shovels are in action – it’s curling season from coast to coast. So what are the stories – not the big headlines, but the everyday stories – happening at curling clubs so early in the season? It’s all about encouraging new curlers, getting a taste of competition and celebrating milestones. Go Curling! 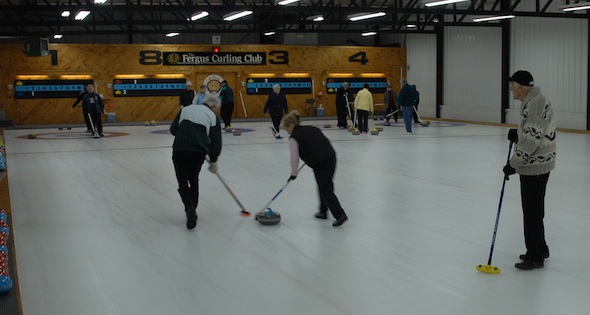 Regular league play is underway in clubs across the country, including the Fergus Curling Club (Photo J. Mills)

Many clubs are gearing up for regular leagues and offering Learn-to-Curl sessions for newcomers of all ages. In Tillsonburg, Ont., a piece in the local paper encouraged new curlers to consider the health benefits: a front end who’s swept an eight-end game may be interested to know that they have just covered about two miles! In Brampton, Ont., a Saturday Open House welcomed interested beginners to drop in all afternoon for free curling lessons. And like so many clubs, Brampton offers an Adult Learn To Curl League, which integrates skills with the fun of friendly, instructional competition. A quick online search reveals that people are learning to curl in places like Wolfville, N.S., and Abbotsford, B.C., and at the Wildewood CC in Winnipeg, Manitoba. In short, the season is new – and it’s full of new curlers too. The Kids are All Right While adults may still be tentative about taking their first slides on the ice, kids definitely are not – tentative, that is. They’re playing the game as beginners and at a high level of competition. The Rocks and Rings program, which introduces kids to a gym-floor version of curling in order to prepare them for the real thing, recently took its show to R.G. Sinclair Public School in Kingston, Ont. Local school school children had a chance to throw “rocks” and practice their “hurry hard” with the assistance of Queen’s University curling champ, Jonathan Beuk. In Paris, Ont., a Bachelor of Education student incorporated a curling club visit into her “Field Trip Friday” project, taking her young charges out on the ice and giving them a chance to experience the sport first-hand.  Student teacher Samantha Stouffer, a member of the Paris Curling Club, developed the program which has since been adopted by other schools in Brant County. 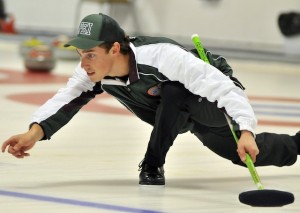 Now representing PEI at the Canadian Mixed Curling Championship, Brett Gallant is a past winner of the Codiac Curling Maritime Junior Bonspiel, one of many annual events attracting junior curlers early in the season (Photo Michael Burns)

But at the other end of the spectrum, the kids are also competing – a lot, and at a very high level. Junior bonspiels are flourishing across the country.  Between October and November, some combination of juniors, bantams and Little Rockers has hit the ice at events at in British Columbia (Cloverdale, Port Moody); Alberta (Leduc, where skip Keely Brown scored an eight-ender!); Manitoba (Winkler); Ontario (London, OVCA Junior Superspiel, and Annandale in Pickering); and the Maritimes (Codiac Curling Maritime Junior Bonspiel in Moncton, Maritime Junior Fall Fling in Summerside, and the Sackville Junior Cashspiel.) Aside from their own spiels, juniors are popping up in the “grown-up” events as well. Youth Olympics Team skip Thomas Scoffin, who recently won the consolation final at the OVCA Junior Superspiel in Ottawa, made it as far as the semi-finals in the Yukon Title Curling Classic, taking place in Fairbanks, Alaska last week. Former winners of Moncton’s Codiac spiel, Brett Gallant and Erin Carmody, are currently representing P.E.I. at the 2011 Canadian Mixed Championship in Sudbury. Yes, the curling kids are definitely all right. Bonspiels and Celebrations The bonspiel list is long and country-wide, and it’s also inclusive. At the Idleton Curling Club near London, for instance, a wheelchair and visually-impaired spiel took place last weekend. At the end of the month, the Rotators League, a gay curling league at the Royal St. George’s Curling Club in Toronto, hosts its annual Second Chance Bonspiel. New curlers, young curlers, old curlers, regular curlers, all curlers – the season is off to its usual energetic start. And for some, that means marking milestones.  In Fredericton, they’re celebrating fifty years at the Capital Winter Club. Perhaps fifty doesn’t sound like a big number, when compared with the 100-year-old St. John’s Curling Club, or the 177-year-old Fergus Curling Club, but that’s fifty years of volunteers, icemaking, draw planning, socializing – and curling. On its special day, the Capital Winter Club opened up its five sheets of ice to everyone: Little Rocks on one sheet, stick curlers on another, regular curling on the other three. And that’s worth celebrating as a new season gets underway: a sport that has room for everyone.