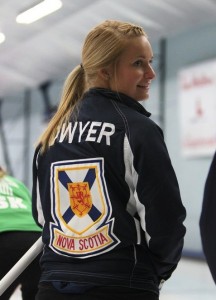 It’s no wonder her team won the Nova Scotia Curling Association’s 2011 “Team of the Year” honours, considering the number of championship events this young skip has reeled in since 2009: High School MVP in 2009 and 2010; Under-18 Provincial Champion in both 2010 and 2011; Optimist Silver Medalist in 2010 and 2011; Youthspiel Provincial Champion 2011; Atlantics Championship Silver Medalist in 2011. And then there’s the 2011 Canada Winter Games, where Emily and her team represented Nova Scotia in Halifax, carving out a fourth-place finish. Emily was introduced to curling by her dad at the Lakeshore Curling Club, five minutes from her home in Lower Sackville, N.S., and it wasn’t long before a coach spotted her potential and guided her towards competitive play, which she began at age 14. For Emily, who currently curls out of the Mayflower Curling Club in Halifax, team is everything. “I couldn’t imagine curling with any other girls,” she says, referring to lead Laura Kennedy, second Katrina MacKinnon – a curling buddy for 11 years – and mate (third) Amanda Colter. “We are like sisters on and off the ice.” They’ve been together for four years, coached (for the last three years) by Marc Brophy, who Emily credits with much of the team’s success. “I give him credit for taking us a long way from where we first started. We all really look up to him,” she says. 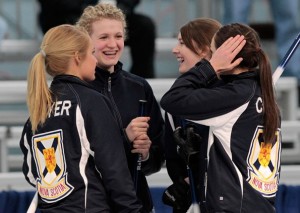 Now a first-year Public Relations student at Mount Saint Vincent University in Halifax, Emily knows the secret to building on her team’s already impressive success. “No matter where we are,” she says, “we’re having fun together. I think that is what has made us successful as a team, not taking things too seriously and learning from our tough days and our amazing days.” Birthplace:   Ottawa, Ontario Hometown:   Lower Sackville, Nova Scotia Curling Club:   Mayflower Curling Club Current Team:   Team Dwyer Position:   Skip Delivery:   Right Nickname:   Emdawg   Quick Hits with Emily Dwyer Do you have any superstitions? “I listen to the same song right before every game with the team, either in the car ride to the club or in the locker room.” Three people, living or not, whom you would invite to a dinner party. “Oprah, Ellen DeGeneres, John Mayer” If you could be a star in any other sport, what would it be, and why? “Figure skating because they get to dress up to perform!” If you could change any rule in curling, which one would it be, and why? “The clock should stop running during time outs. Hint: the name “time out”.  It adds unnecessary stress to the players.” What music do you like to listen to before a game? “Pump-up songs that get me moving around and dancing with the team.” Favourite: … Website?  “Facebook” … Order from Tim Hortons?  “12-grain bagel and chocolate milk (or iced cap)” … Vacation destination?  “Anywhere hot with a beach!” … Junk food?  “Bubblegum ice cream” Do you have any pet peeves? “When people/events aren’t on time” Three things you always travel with? “Blackberry, iPod, contact lenses (need to see!!)” First thing on your Bucket List? “Travel as much as possible; hopefully do one of my co-ops in another country.” Favourite pastime between draws at spiels? “Listen to quiet music in bed.” One thing most people don’t know about you? “Petrified of june bugs!! I don’t leave the house at night time in June.” What is the biggest misconception about curlers? “They can’t play sports or aren’t athletic” Your ideal shot to win an Olympic gold medal: “Draw to the four foot.”