The way Alison Kreviazuk is piling up provincial championships in Ontario, she’d better make sure she has enough closet space to accommodate all of the Ontario jackets. Just 23 years old, Kreviazuk is a member of one of the most talented young women’s teams in the world, throwing second stones for the Rachel Homan team, based in Ottawa (rounded out by third Emma Miskew and lead Lisa Weagle). 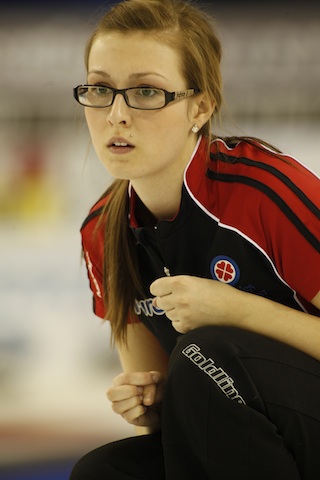 And the bulk of that team (Kreviazuk, Homan and Miskew) has been together for more than a decade, and has had success almost from Day 1. Kreviazuk played on three Ontario Bantam Girls champion teams (in 2003, ’04 and ’05) as well as the Ontario bantam mixed champion in 2003. The team made a successful jump to the junior level, and was an immediate contender for the provincial title, losing heart-breaking finals in 2007 and 2008, coming through in 2009 to earn a trip to the Canadian junior championship in Salmon Arm, B.C., where the team went 10-2 to top the round-robin, only to lose to Manitoba’s Kaitlyn Lawes in the championship game. Kreviazuk aged out after the 2008-09 season, but when Homan’s team claimed the 2010 Canadian title, Kreviazuk, who was still junior-eligible under World Curling Federation rules, was asked to be the team’s alternate, and that Canadian team came home with a silver medal from the world junior championships in Flims, Switzerland. But Kreviazuk had already received a taste of high-level competition with Homan earlier that year as the Ontario squad was one of the final 16 eligible to represent Canada at the 2010 Winter Olympics, and competed at the Tim Hortons Road to the Roar qualifying event in Prince George, B.C. — a major accomplishment for such a young team. Once Homan and Miskew completed their own junior eligibility after the 2009-10 season, they reunited with Kreviazuk, and brought in a new lead, Lisa Weagle. The team clicked immediately to win the 2011 Ontario women’s title, and went on to a respectable fourth-place finish at the 2011 Scotties Tournament of Hearts in Charlottetown, falling in the bronze-medal game to Heather Smith-Dacey of Nova Scotia. And already this season, Kreviazuk’s collection of jackets is growing — she played lead for the Ontario team at the Canadian mixed championship, which wrapped up on Sunday in Sudbury, Ont. Birthplace: Mississauga, Ont. Hometown: Ottawa Curling Club: Ottawa Curling Club Current Team: Team Rachel Homan Position: Second Delivery: Right Nickname: Ali Quick Hits with Alison Kreviazuk Do you have any superstitions? “No, but my team sure does! Not changing socks being one of them.” If you could change any rule in curling, which one would it be, and why? “To be able to re-throw a picked rock.” What music, if any, do you like to listen to before a game? “Pump-up music.” Favourite: — Website? “Our website of course! www.teamhoman.com.” — Order from Tim Hortons? “Large coffee, one milk one sugar. Lisa (Weagle) and I are the coffee drinkers on the team.” — Vacation destination? “New Zealand, my favourite place so far!” — Junk food? “Chocolate!” Do you have any pet peeves? “People who talk during movies!” Person who had the most influence on your curling career. And why? “My Grandma Net, the one who got me into the sport in the first place. She’s still playing in Sarnia and continues to be my No. 1 fan.” 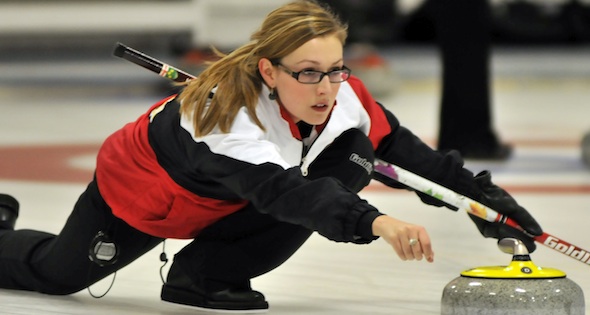 First thing on your Bucket List? “I love to travel! There are a lot of places left on my list; last summer I went to Australia and New Zealand. This summer?? Decision still pending.” Favourite pastime between draws at cashspiels? “Cards (mainly hearts), and somehow Rachel always wins!” Mixed doubles in the Olympics — thumbs up?  Thumbs down? And why? “I’d rather watch a full mixed team participate rather than doubles.” One thing most people don’t know about you? “I’ve played with Rachel and Emma for 11 years now — believe it or not!” Your ideal shot to win an Olympic gold medal: “Since I throw second, I’d love it if Rachel’s final shot was an inturn draw to the pin (with a bit of help from me).”