Manitoba and Ontario remain undefeated after three games in The Dominion Curling Club Championship Women’s Draw at the Richmond Curling Club in Richmond, B.C. Quebec can also boast a winning 2-0 record, but with a bye in Draw 5, the team out of the Club de Curling Laval-Sur-Le-Lac remains one game behind the leaders. Team Ontario stole three ends and powered their way to an 11-1 victory over Team Newfoundland and Labrador, with multiple points in each end, including a crushing 4 in the third. With the score at 6-1 after three, Ontario went on to steal the next two ends, putting the game out of reach. 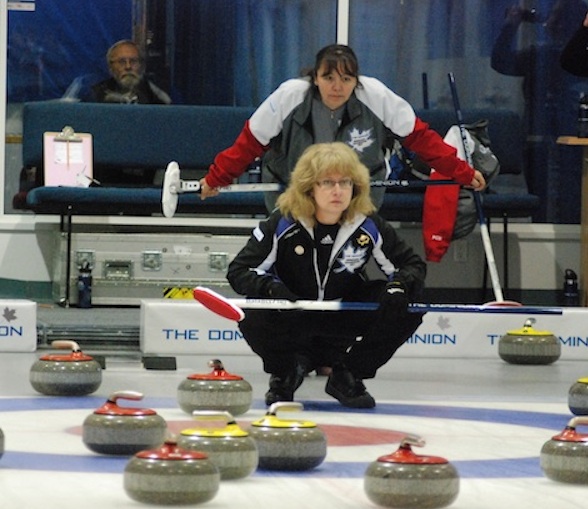 Meanwhile, Manitoba had its hands full against Northern Ontario in a match that saw teams exchanging points until a steal in the eighth put it away for Meghan Armit’s Granite Club foursome. Northern Ontario skip Melanie Patry had a chance to tie the game in the final end, but her attempt at a difficult raise takeout went just wide. One game that had a lot of attention didn’t involve teams near the top of the standings.  Northwest Territories beat The Yukon 8-1, in a game that featured a lot of kidding between the two geographic rivals.  NWT Skip Diane Baxter of Inuvik is now 1-1, while Yukon falls to 0-3.  However, Baxter jokingly says they were keeping a close eye on the Yukon players, and a few other teams on the ice, after their stuffed animal mascot (a polar bear) went missing today. “We’re not sure who has taken it. We have four teams we suspect, but on the ice it was a lot of fun,” says Baxter, who plays out of the Inuvik Curling Club. “We’ve been trying to use our mascot for good luck, and to intimidate some of our opponents.” In other games, PEI notched its first win with a 9-3 victory over Nunavut, while Alberta beat New Brunswick 7-2, and Saskatchewan beat Nova Scotia 6-4. In Women’s Draw 7 on Wednesday evening, Ontario will try to keep its winning streak alive against Quebec, and Manitoba will be up against mascot-less Northwest Territories. Other games feature Prince Edward Island against Saskatchewan and Alberta against British Columbia. Four teams still looking for their first win will round out the evening draw, with Newfoundland and Labrador against Nunavut, and New Brunswick playing Yukon. Nova Scotia and Northern Ontario have tonight off and take to the ice again in Draw 10 on Thursday afternoon. The Dominion Curling Club Championship is Canada’s first national championship for men’s and women’s curling teams at the club level. The event is fully funded and operated by The Dominion of Canada General Insurance Company. The Dominion is a proud supporter of curling across Canada and has been a strong supporter of the Canadian Paraplegic Association for over 13 years. Canadian owned and operated since 1887, today The Dominion is one of the country’s largest home, car and business insurers. Get to know The Dominion by visiting thedominion.ca.