Ontario and Manitoba continued their domination of the Women’s Draw at The Dominion Curling Club Championship on Wednesday evening with wins that left both teams at 4-0 atop the standings. 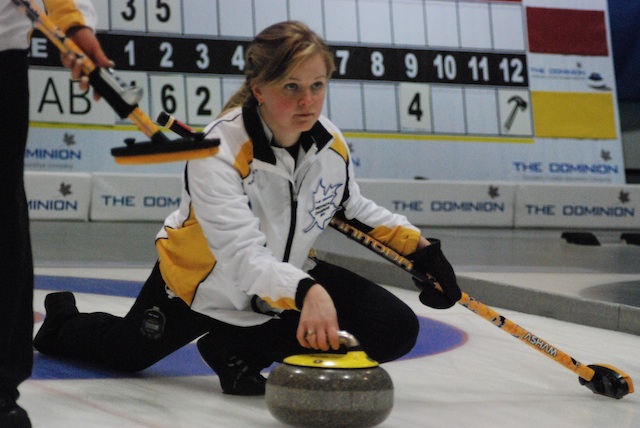 Manitoba skip Meghan Armit and her team sit on top of the leader board, tied with Ontario with a 4-0 record (Photo Yadranka Thompson and The Dominion)

After giving up 1 in the first end to the team from the Northwest Territories, Team Manitoba, led by skip Meghan Armit of Winnipeg’s Granite Curling Club, scored 3 in the second and stole its way – including two more 3-point ends – to an 11-1 victory over Diane Baxter’s foursome from the Inuvik Curling Club. Over on Sheet E, Ontario had a tougher battle against an undefeated (2-0) Quebec team that fought back from a 5-1 score after four ends. Ontario skip Jodi McCutcheon was gaining a new nickname: Mc”Clutch”eon, but despite earning an eventual 6-4 win over Sylvye Turgeon and her Quebec squad, McCutcheon wasn’t happy with her own play, even with Ontario’s 4-0 record after Draw 7. “I just didn’t have my draw weight…didn’t have my ‘mojo’ working,” said the Ontario skip, a former competitive player leading her club team in this national championship. Ontario built up a 5-1 lead after four ends, but couldn’t put Quebec away. “Quebec’s girls were making great shots, and I just couldn’t make my last one (in the last few ends).  It was getting very frustrating.” The foursome from the Club de Curling Laval-Sur-Le-Lac managed to find – and steal – 4 points over the next three ends to make it close. The game ended in dramatic fashion, with Ontario winning a measurement in the eighth end to prevent a steal of one, which would have forced an extra end.  The loss dropped Quebec to 2 and 1 and left Ontario tied with Manitoba at the top of the leader board. In other action, Prince Edward Island fell to Saskatchewan 11-3, New Brunswick picked up its first win with a 10-3 victory over Yukon, and Nunavut stole its way to a 7-0 win over Newfoundland and Labrador, its first win of the competition. A tight battle between Alberta and British Columbia saw Alberta steal a point in the eighth end to tie, and then steal again in the extra end for the 7-6 win. Action continues at The Dominion Curling Club Championship on Thursday for both the men’s and women’s teams as they juggle for position in two pools – Grey and Blue – in preparation for the playoff round on Saturday. The Dominion Curling Club Championship is Canada’s first national championship for men’s and women’s curling teams at the club level. The event is fully funded and operated by The Dominion of Canada General Insurance Company. The Dominion is a proud supporter of curling across Canada and has been a strong supporter of the Canadian Paraplegic Association for over 13 years. Canadian owned and operated since 1887, today The Dominion is one of the country’s largest home, car and business insurers. Get to know The Dominion by visiting thedominion.ca.