The leaders are starting to emerge after two draws on the women’s side of The Dominion Curling Club Championship at the Richmond Curling Club in Richmond, B.C. Manitoba skip Meghan Armit of the Winnipeg Granite Club scored a 16-2 win over the Yukon in the evening draw, after opening with a 6-5 win over B.C., skipped by Deb Goodwin of Comox Valley. The Yukon team, (skip Sherry MacInnis, third Bev Murphy, second JoAnne Snobelen and lead Janis Harper), which plays out of tiny Atlin, B.C. (population 400, just south of the Yukon/B.C. border) took the loss in stride.  Their home club only put their ice in a few weeks ago, so the foursome haven’t had much chance to play before travelling to Richmond.  But they’re enjoying the experience, and they’re one of the top fundraisers of all the teams in the event, which raises money for the Canadian Paraplegic Association. Joining Manitoba are Ontario (6-5 over Nova Scotia in the evening draw), Northern Ontario and Quebec, all tied atop the women’s standings at 2-0. In other Draw 4 action, Nunavut and Saskatchewan traded steals, but a big 3 by the team from the Hillcrest Curling Club in Moose Jaw resulted in a 6-3 victory for Saskatewan’s Patricia Yeske over Nunavut’s Kristy Hewitt. Northern Ontario and Alberta battled in a close game won by Coniston Curling Club’s Melanie Patry over Lethbridge’s Kendra Nakagama, 5-4. 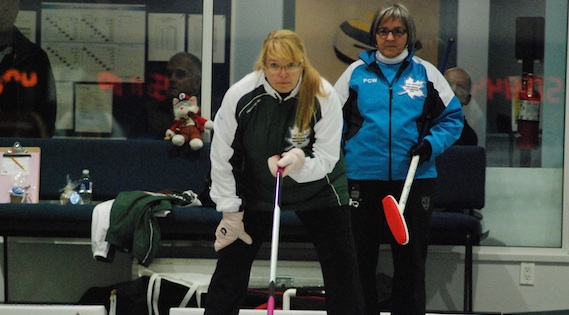 PEI skip Lorianne Davies calls the line in a 6-4 loss to Quebec, skipped by Sylvye Turgeon (Photo by Yadranka Thompson and The Dominion)

British Columbia opened scoring with 4 in the first end, setting up a tough start for the team from the Northwest Territories, playing their first game after a bye in Draw 2.  Inuvik Curling Club’s Diane Baxter scored singles in the second and fourth ends, but another big 3 by B.C. in the third sealed the win with a final score of 11-2. Prince Edward Island’s foursome from the Cornwall Curling Club also played their first game after a bye in Draw Two. Despite a big score of 3 in the third end, they fell to Sylvye Turgeon’s Quebec team by a score of 6-4. Before Tuesday’s final evening draw, all 28 teams took part in the Opening Ceremony, and the throwing of the official “First Rock”.  The teams, following long standing curling tradition, were piped onto the ice to watch Paralympic and Canadian Wheelchair curling champion Daryl Neighbour throw the rock.  Assisting Neighbour were celebrity sweepers Greg McAulay and Brent Pierce (the skip and third from the 2000 Brier and World Men’s Champions from B.C., with The Dominion Branding Coordinator Leigh Armstrong holding the broom. The Dominion Curling Club Championship is Canada’s first national championship for men’s and women’s curling teams at the club level. The event is fully funded and operated by The Dominion of Canada General Insurance Company. The Dominion is a proud supporter of curling across Canada and has been a strong supporter of the Canadian Paraplegic Association for over 13 years. Canadian owned and operated since 1887, today The Dominion is one of the country’s largest home, car and business insurers. Get to know The Dominion by visiting thedominion.ca.