Pebbles to Boulders: The Merklinger Twins

Anyone who curls in the Ottawa area or has some involvement with curling at the national level is familiar with the family name Merklinger. The Merklingers have been active in curling for what seems like forever. On-ice, they are fierce competitors. Off-ice, they are some of the finest ambassadors the sport of curling could have. The latest version of the Merklingers is twin sisters Lee and Breanne, who started their curling careers as Little Rockers at the Navan Curling Club, near Ottawa. The Navan Curling Club had a very small youth program. Juniors and Little Rockers curled at the same time. The Little Rockers used the red and blue Kids Can Curl rocks. Lee and Bre were six years old when they started curling. The best part about the Navan club was that when you walked in the club for Sunday morning curling, cartoons were on the TV, hot chocolate was made and Tim Bits were available: a very important aspect of curling when you are six years old. The club even played music on the ice. The worst part of curling for the young girls was those -30C winter mornings standing around listening to the instructors. Eventually, the instructors figured out that less talk and more play time was best for six-year-olds who haven’t developed their listening skills. 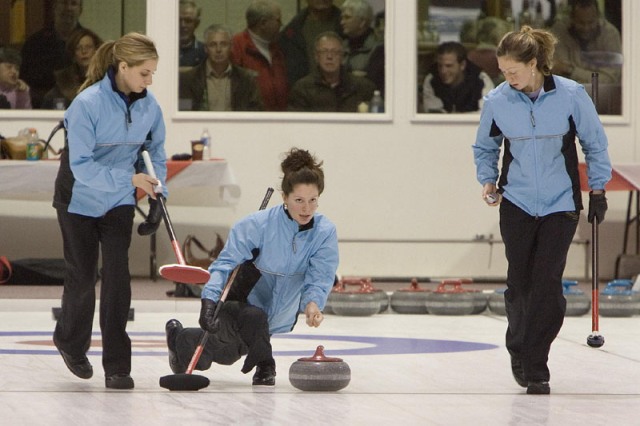 Curling is a big part of the family way with the Merklingers. Brother Dave lives in B.C., is one of the country’s top ice makers, making quality ice for national and international events. Big sister Anne, only recently stepped back from competitive curling, was always in the hunt for provincial and national titles. Many years ago, brother Bill dedicated his time to a career with the federal government, but was a top notch curler for many years. Dad, Bruce Merklinger, has been there every step of the way, nurturing and coaching the kids. “Breanne and I were very lucky. Because my Dad was so involved with the CCA, OCA and coaching, we had a leg up on most kids my age,” reflects Lee on her Little Rock career. “Dad would teach us the proper techniques even at a very young age.” Breanne thinks back to her Little Rock days remembering that she did not think curling clothing was cool. “I had decided to curl in jeans one day. The one and only time I’ve curled in jeans since I found out that curling in jeans is very uncomfortable. I soon gained a new appreciation for curling apparel.” Watching older sister Anne was a big treat for the twins. “We would cozy up on the couch, with the fire started, hot chocolate on the stove, getting ready to see Anne play on TSN,” Lee remembers, “and we would hope that a time-out would be called so we could see Dad come down to the ice with some coaching tips.” Dad encouraged Lee to skip. Remembering back to those early days, Lee recalls a practice game played with girls against boys. The boys were a little older than the girls, but it was the girls who won the game on last shot. The boys sure were miffed that younger girls beat them. The experiences from Little Rocks lead to a succession of trips to the provincials and with a couple of close calls at finals to go to nationals, not quite making it. They teamed up with Lisa Weagle and Leslie Levere, attending nine provincials in seven years – altogether, an amazing streak of curling success. While the youth team members have gone their separate ways, these girls are still the best of friends, regularly contacting each other to catch up on news. 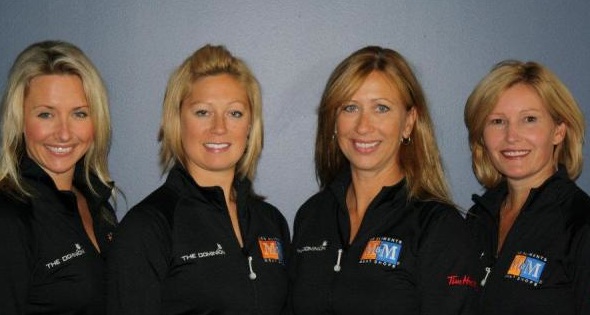 Currently Breanne is not curling competitively, choosing to concentrate on her work with Canada Revenue Agency and taking the Corporate Risk Management professional designation program from the Sprott School of Business. Breanne says, “I am itching to get back into it (competitive curling) and believe it is just a matter of time as I love curling. I hope to curl with Lee again.” Lee is continuing to curl at the highest of level, playing second for the Sherry Middaugh team who have accumulated numerous spiel wins this season. “Curling has brought me to several provincials; given me a chance to curl against world championship players and teams; brought me to Grand Slam events; got me invited to national team programs; provided me the opportunity to travel to different countries and visit interesting towns across Canada…. Next stop, the Olympics!” If you know of a Little Rock curling program or a special Little Rocker that has a story to be told, I would be thrilled to hear from you. Contact me at email, [email protected].