They may have come into the final as the underdog, but Manitoba’s Meghan Armit took advantage of some key misses by Ontario to defeat Jodi McCutcheon by a score of 8-6. 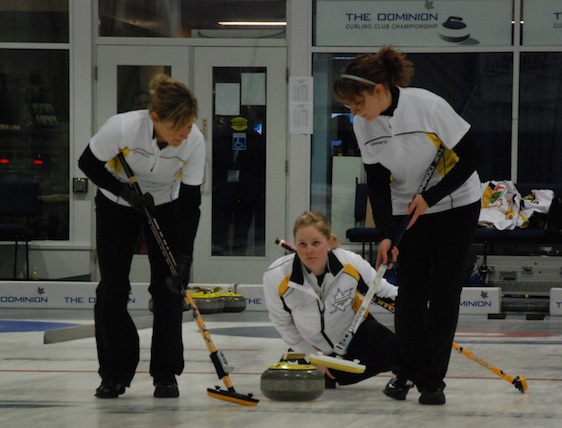 Manitoba skip Meghan Armit and sweepers Sarah Lund and Nadine Cabak Ralph on their way to defeating Ontario in the finals of The Dominion Curling Club Championship today in Richmond, B.C. (Photo Yadranka Thompson and The Dominion)

Both teams finished on top of their pools, but Ontario’s McCutcheon, whose team includes Joanne McMichael, Jeni Mah and Kelly Williams, came into the final with a 6-0 record and a slight edge over Manitoba, 5-1 after round-robin play. The final was a see-saw affair, with Manitoba scoring 3 in the fourth end to go up 5-2, and Ontario bouncing back with a 4-ender in the fifth to take a 6-5 lead. The game turned for good in the seventh, when McCutcheon had an open hit to score 3, but instead gave up a steal of 1. That four-point swing turned out to be the difference. Armit, a competitive player who lost a provincial junior semi-final two years ago, says she was most happy for her club teammates. “Some of the girls have tears in their eyes,” she said after the game. “This has been such an amazing week.” Armit’s next game will be her regular Wednesday night club game at the Granite Club with her winning teammates Nikki Hawrylyshen, Sarah Lund and Nadine Cabak Ralph. “I don’t know who we’re playing, but it should be interesting.” The Dominion Curling Club Championship is Canada’s first national championship for men’s and women’s curling teams at the club level. The event is fully funded and operated by The Dominion of Canada General Insurance Company. The Dominion is a proud supporter of curling across Canada and has been a strong supporter of the Canadian Paraplegic Association for over 13 years. Canadian owned and operated since 1887, today The Dominion is one of the country’s largest home, car and business insurers. Get to know The Dominion by visiting thedominion.ca.