The top two teams in the Women’s draw of The Dominion Curling Club Championship will face off for the title Saturday afternoon in Richmond, B.C. High Park Curling Club’s Jodi McCutcheon, along with teammates Joanne McMichael, Jeni Mah and Kelly Williams went undefeated through round-robin play, and continued that streak into the semi-final match with a 6-4 win over a late-surging Northern Ontario. 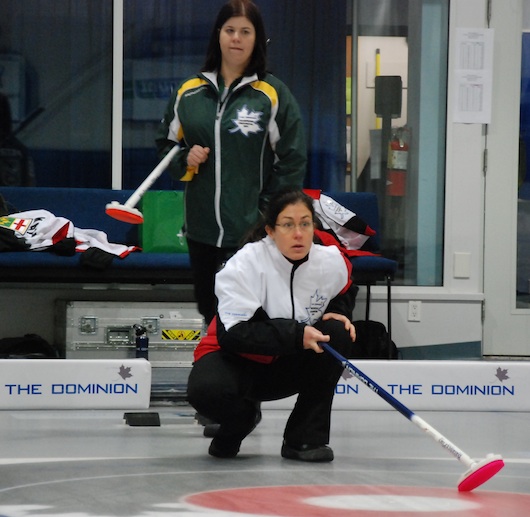 McCutcheon, a former competitive player who now just plays once a week with her club team, bailed the team out of trouble over and over to give Ontario a 6-4 win over Northern Ontario’s Melanie Patry. Patry’s Coniston Curling Club foursome, which includes Christine Dubuc, Nicole Dubuc-Charbonneau and Bryna Gaudette, scored a deuce in the third, but were held to singles in the fifth and seventh ends. McCutcheon put the game away with a final hit and stick, sending Ontario into the final. In the other semi-final, Manitoba’s Meghan Armit, aided by her teammates Nikki Hawrylyshen, Sarah Lund and Nadine Cabak Ralph, scored 2 in the first end and a big 3 in the third. Saskatchewan skip Patricia Yeske and her team of Danielle Sicinski, Pamela Clothier and Leslie Glova, weren’t able to climb back, despite a steal of 1 in the seventh end. Armit finished in impressive style, with a thin double-takeout to run Saskatchewan out of rocks. The final comes down to a battle between the two teams who dominated the Women’s competition this week. Manitoba finished the round-robin on top of the Grey Pool with a 5-1 record, and Ontario finished at 6-0 at the top of the Blue. Game time in Richmond is 2 p.m. PST. The Dominion Curling Club Championship is Canada’s first national championship for men’s and women’s curling teams at the club level. The event is fully funded and operated by The Dominion of Canada General Insurance Company. The Dominion is a proud supporter of curling across Canada and has been a strong supporter of the Canadian Paraplegic Association for over 13 years. Canadian owned and operated since 1887, today The Dominion is one of the country’s largest home, car and business insurers. Get to know The Dominion by visiting thedominion.ca.