Thinking Time: A new rule gets a look at the Canada Cup of Curling

Around 20 years ago, former Canadian women’s curling champion Patti Wuthrich (back then, she was Patti Vande) was trying to get her head around a problem. As technical director for the Manitoba Curling Association, Wuthrich had been asked by MCA executive Jerry Brown to analyze the relatively new timing system that had been implemented for national and provincial championship events. Keep in mind that the timing system’s first (and in many ways ONLY) priority was to make 10-end curling games fit into a TV-friendly window of time. TSN and CBC were, understandably, reluctant to show games that dragged on for more than three and a half hours because it cut into other scheduled programming, and also cost them money because they’d have buy extra transmitting time on the satellites – not to mention the fact that a viewer’s attention span is finite, and the sound of channels changing as teams discussed strategy became deafening. But Brown and Wuthrich both saw inherent flaws — mainly, that teams were penalized for playing draw shots over takeouts for the simple reason that draws take longer than takeouts. So Wuthrich, with input from Brown, came up with a different way to time curling games. She believed the only fair thing to do was to run the clocks while the teams were discussing shots, and turn them off when the rocks were in motion, so that draws and takeouts would, quite rightly, be equal in the big picture. 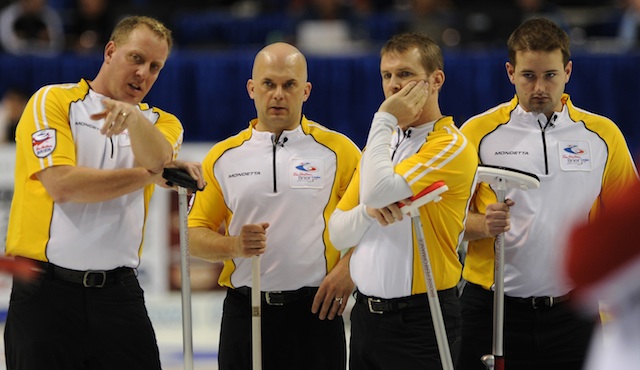 Steve Gould, Jonathan Mead, Jeff Stoughton and Reid Carruthers take some time to think about their next shot at the 2011 Tim Hortons Brier (Photo Michael Burns) 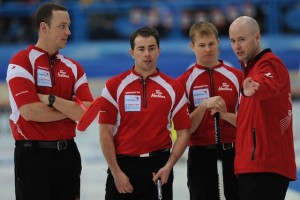 In addition to the thinking time rules, it’s also notable that the CCA has backtracked on the timeout issue, reverting to allowing teams to stop the clock twice a game in order to speak with coaches, eliminating the unseemly (but at times awfully funny) sight of coaches sprinting from their seats to the other end of the ice to speak with their players. And while that, too, is good news for the players, it’s the looming change to thinking time that they’ll be most pleased about. “Oh, for sure, it’s a way better system and I’m surprised it’s taken them this long to bring it in,” said 2010 Tim Hortons Brier and world men’s champion Kevin Koe of Calgary. “It just makes total sense. You don’t get penalized for being down in a game, right? And if you’re getting short on time, you can play pretty quick and make some time up. With the system now, if you’re short on time, you’re kind of screwed. Draw shots take a lot longer, and that makes it tough to come back in games.” 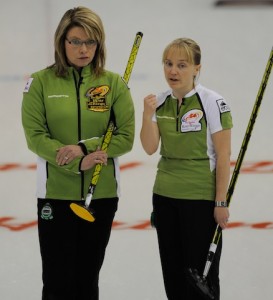 “I think that’s the way it’s going and I’m happy to hear about it,” added Winnipeg skip Mike McEwen. “It seems a little bit easier to manage your time; you can speed up your play without affecting your strategy one way or another. You don’t really have to change your playing, as opposed to how much time you spend between shots, prepping or whatever.” There have been no games lost at the national level because teams ran out of time, but it’s certainly happened twice in Alberta men’s championships over the years, and there’s no question that clock mismanagement has led to some notable losses — including Alberta’s Shannon Kleibrink being under the clock gun late in the 10th end against Nova Scotia’s Heather Smith-Dacey in a crucial round-robin game at the 2011 Scotties Tournament of Hearts in Charlottetown last February and having to rush her last shots and the accompanying strategy sessions. The same thing happened to Newfoundland and Labrador’s Heather Strong while playing Team Canada’s Jennifer Jones at the 2008 Scotties in Regina; Strong ended up losing as a result, and a win would have knocked Jones out of contention. Instead, Jones rattled off a massive winning streak en route to a national title. “The biggest problem with thinking time is that in situations where it’s a really tight, exciting game, it really puts the gun on teams,” says Kleibrink’s vice-skip Amy Nixon. “I’m not sure it’s the best way of going about things for the spectators. But it’s a bit better for teams that play a lot of draws.” But, quite frankly, that’s the biggest selling point of thinking time. Draws are fun to watch. They lead to exciting shots. Open takeouts? Not so much. Once the Canada Cup is done, feedback (expect it to be almost entirely positive) will be gathered and, eventually, presented to the CCA membership at the annual general meeting in June. “We know the players like it, and in all likelihood, we’ll propose it as a rule change and put it up for discussion,” says Lamoureux. From the office of Minerva Tree Farms — the landscaping company she operates with her husband Hans (yes, THAT Hans Wuthrich) — in Gimli, Man., Patti Wuthrich is happy to hear that her idea is finally taking root. “It’s gratifying,” she says. “It took a while, but I’m glad to hear people are coming around.” You might say, it took some time.