The Dominion Curling Club Championship – contested November 21–26 in Richmond, B.C. – included a touch of the Scotties this year. 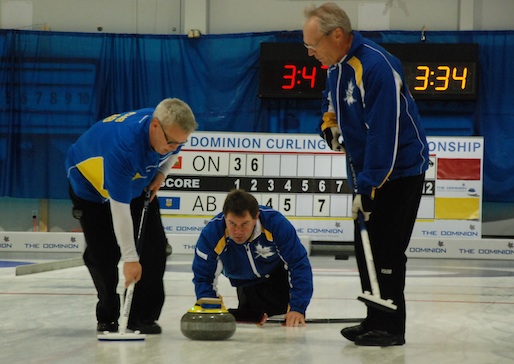 The men’s side of the draw was won by the Red Deer team made up of Wade Thurber, Rich Hjertaas, Harvey Kelts and Eldon Raab… all of them involved as volunteers for the upcoming Scotties Tournament of Hearts. Three of the champions, Thurber, Hjertaass and Raab, have major roles in the volunteer efforts, serving as directors for the Host Committee. The Dominion is an annual competition for men’s and women’s teams that gives club curlers across the country the opportunity to take part in a championship event. Teams compete in club playdowns, moving on to the provincials for the right to represent their province. “Our team is so proud to represent Red Deer, Alberta, and bring home the men’s Dominion National Curling Championship,” said Raab.  “All of us are involved with the Scotties so we’re now switching our focus to make sure the Scotties is the very best ever!” “You Gotta Be There” for the 2012 Scotties, Februray 18 – 26 at Westerner Park.  Excellent seats are still available just by clicking here.