Simcoe, Ontario, curler Donna Hawkins says she’s a vice, but it was as skip that she led the Hamilton Blind Curlers to the Silver Medal at the Canadian Vision Impaired Curling Champioships in 2009. This busy member of the Simcoe Curling Club lends her organizing skills to curling events such as bonspiels and playdowns. She’s on the organizing committee for the 2012 Provincial Senior Men’s and Women’s Curling Championships to be held at her home club. 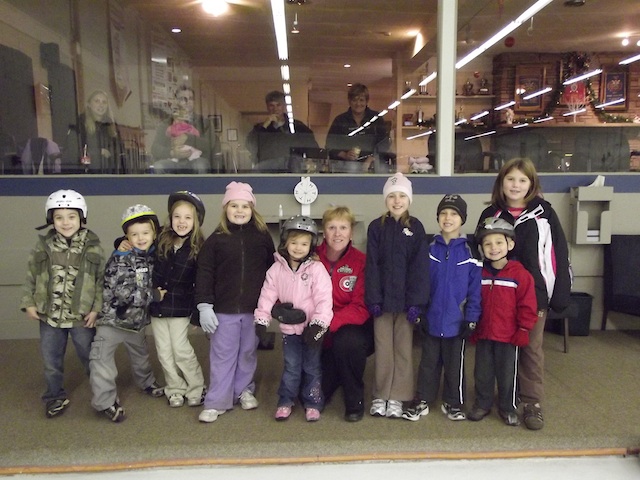 "They are priceless!" Donna Hawkins and her Little Rockers posing for the camera at the Simcoe Curling Club (Photo courtesy D. Hawkins)

But one of her favourite on-ice activities is introducing kids to the sport of curling. “I volunteer a lot at the club to teach junior curlers beginning curling skills, ages 4-10 years,” she says. “The youngest is 3 1/2 years old and loves to be on the ice.  When they are able to slide and throw junior rocks, they move up into the next group.” Hawkins adds: “They are priceless and I love to work with them.” And like many curlers, when the ice is gone, she hits the links. Hawkins is deeply involved with the Ontario Vision Impaired Golfers, where she is the Secretary/Membership Coordinatior for that organization. In 2011, she won the Western Open Golf Championship (net score for Ladies) and The Canadian Open (gross score for Ladies). Not only that, but she was also the Ontario Provincial Ladies Champion. “I do take both games quite seriously,” she says. “In golf, I play against myself but enjoy it always.  In curling, it is truly a team sport and I curl with a great vision impaired team as well as with many sighted curlers in league play.” Birthplace:  Simcoe Ontario Hometown:  Simcoe Ontario Curling Club:  Simcoe Curling Club Current Team:  Mixed Wednesday Night Team Position: Vice Delivery: Right Quick Hits with Donna Hawkins  Do you have any superstitions?  “I don’t think so.  None that I can think of.” Three people, living or not, whom you would invite to a dinner party. “Jim Simmons, my current skip on the team.  He is always positive and encouraging to all members and has a great outlook on life in general. My late Mother, Betty Lawrence who always believed that I could do anything I set my mind to do.” If you could be a star in any other sport, what would it be, and why? “I have just taken up lawn bowling and I quite enjoy the sport.  I think with practice and instruction it would be very much like curling, and it would require skill and strategy.” If you could change any rule in curling, which one would it be, and why? “I am happy for people with disabilities that are able to use the stick but I think it makes it difficult to compete with those curlers who have mastered it.  There seems to be greater accuracy with it.  I hope competitive curling will always be curling from the hack.” What music do you like to listen to before a game? “I like themes from movie scores, both old and new.” 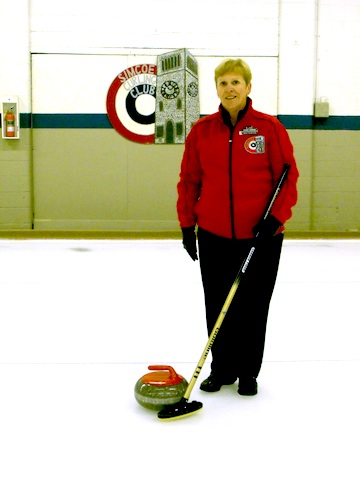 Favourite: … Website? “Yahoo” … Order from Tim Hortons? “Raisin bran muffins” … Vacation destination?  “Scottsdale, Arizona” … Junk food?  “Chocolate marshmallow sundaes” Do you have any pet peeves? “I don’t like self pity or people who judge others.  Every person has qualities and is unique.” Three things you always travel with? “My passport ( but now I have a new Ontario photo card), a suduko book, and my CD player.” First thing on your Bucket List?   “To travel to Hawaii.” Favourite pastime between draws at spiels? “I like to visit and meet new people. Often curling is on the TV at the club.  We also have two great caterers (at Simcoe CC), Linda and Deb, who help fill our time and our tummies with lots of good yummies.” One thing most people don’t know about you? “That I taught figure skating for 25 years as a second job to being a nurse.” What is the biggest misconception about curlers? “People think that you have to be athletic to curl and it is dangerous because it is played on ice.  Also they think it costs a lot.  Anyone can learn to curl at any age.” Your ideal shot to win an Olympic gold medal:  “It is my great desire that, while I am still healthy, vision impaired curling will become a part of the Paralympics and that I might be there participating.”