These days, teams protecting a lead in the last end of a curling game can’t be successful if their lead doesn’t have the tick shot in his arsenal. It wasn’t always that way, particularly when the free-guard zone rule was introduced in the mid-1990s. The tick wasn’t considered a reliable shot, and teams generally preferred to throw rocks through the rings. 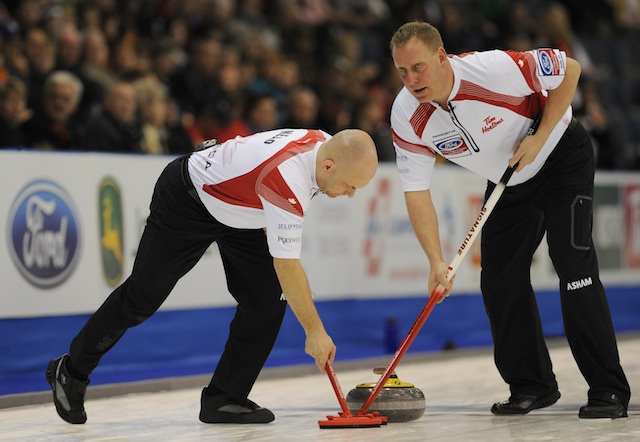 Then along came Steve Gould. The young lead for Jeff Stoughton’s Manitoba championship team at the 1996 Brier in Kamloops made the tick shot into an art form during that run to the Canadian men’s championship, capped by Stoughton’s victory over Alberta’s Kevin Martin in the final, and then a gold medal at the Ford World Men’s Curling Championship in Hamilton. Fifteen years later, Gould is still the master of the tick shot — the delicate hack-weight throw that’s intended to move a guard off the centre-line and over towards the sideboards, but keep it in play. Over the years, he’s strengthened his reputation as one of the game’s most reliable and accurate leads, and was Stoughton’s choice as the alternate for his 1999 team that won the Brier and finished second at the world championship. And these days he’s still making those tick shots, and many others, as he helps the Stoughton team — rounded out by third Jon Mead and second Reid Carruthers — continue to play at a high level, including last season’s run that produced victories at the Tim Hortons Brier in London, Ont., and the Ford World Men’s Curling Championship in Regina. Gould’s terrific career has produced six Brier Purple Hearts, and he’s also shown off his skills by winning two titles in the Ford Hot Shots competition. As well, he’s been named to a pair of Brier all-star teams, the first team in 2006 in Regina and the second team in 2009 at Calgary. Birthplace: Winnipeg Hometown: Headingley, Man. Curling Club: Winnipeg-Charleswood CC Current Team: Team Jeff Stoughton Position: Lead Delivery: Right Nickname: Tickman Quick Hits with Steve Gould Do you have any superstitions? “I’m not at all superstitious.” Three people, living or not, whom you would invite to a dinner party. “Hmmmm . . . Anthony Hopkins, Jodie Foster and Minnie Driver.” If you could be a star any other sport, what would it be, and why? “Hockey; I love the toughness and the speed of it.” If you could change any rule in curling, which one would it be, and why? “Use the hog-line violation sensors at all events; I know it’s never going to happen but you asked.” What music, if any, do you like to listen to before a game? “I don’t listen to music before games.” Favourite: — Website? “gouldandsonsroofing.ca.” — Order from Tim Hortons? “Double-double.” — Vacation destination? “Wisconsin Dells.” — Junk food? “Look at me — pizza!” Do you have any pet peeves? “Rudeness.” Person who had the most influence on your curling career. And why? “It was, and still is, my brother Norm (who coaches Team Stoughton). I would not have played if it weren’t for him.” First thing on your Bucket List? “Becoming world champ (bin there, dun dat!).” Favourite pastime between draws at cashspiels? “I love to read and play Risk. Conquer Rama!!” Mixed doubles in the Olympics — thumbs up? Thumbs down? And why? “Thumbs down. It’s a gimmick.” One thing most people don’t know about you? “There’s not much to say; I’m pretty much an open book. No secrets.” Your ideal shot to win an Olympic gold medal: “Throw-through!!!” 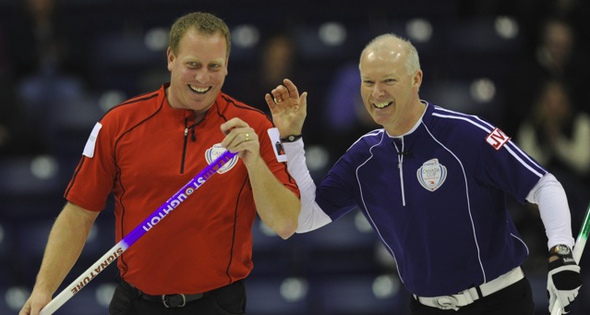