Around the House: Resolve To Do More at Your Curling Club

It’s the season of giving gifts, socializing with family and friends, and looking back – and forward. Yes, it’s resolution time. Curling clubs are more than just bricks and mortar, pipes and ice plant, bar and club room. Clubs are people. So here are a few resolutions to ponder while looking forward to the rest of a season of good curling at your club. Thank your icemaker Yes, it’s the icemaker’s job to ensure those sheets are gleaming, scraped, pebbled and ready for you to play on. But it doesn’t happen by magic. It takes hours of effort and whole lot of know-how to create the playing surface you depend on every week. And don’t think he or she isn’t aware of that run on Ice 4, or that wonky drift on the outside sheet. Icemakers wrestle with those problems all season long, ensuring that all that frozen water works for you.  Resolve to say “thanks” next time you’re at the club. And while we’re on the subject, here’s something you can do to make the icemaker’s job easier (read on). 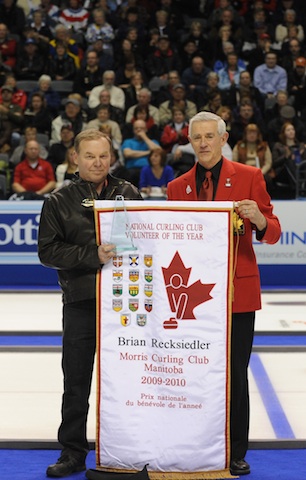 Are you a super volunteer? Manitoba's Brian Recksiedler, of the Morris Curling Club, sure is. He's seen here receiving his Volunteer of the Year Award from CCA President Jack Bowman at the 2011 Tim Hortons Brier. (Photo Michael Burns)

Clean your curling shoes and upgrade your grippers As Calgary Winter Club curling pro Kim Perkins noted in her recent “House Call” column, new grippers make a great Christmas present. If they didn’t appear under your tree this year, consider a quick trip to the pro shop. Flaking grippers and curling ice do not mesh. For that matter, neither do ice and dirty curling shoes. Resolve to use the boot cleaner every time you step on the ice, and put your shoes on away from the outdoor grit and dirt that is tough to avoid during the winter season. Bring a friend There may be a few clubs out there with full draws, no free ice time, and waiting lists for membership, but that’s not the norm. Resolve to bring a friend and help your curling club grow. Learn the rules A contentious one, this. Did anyone actually sit you down and make you read the rule book when you started curling? Probably not, and many of us would be very surprised if we had to take a test on the real rules of play – and the rules of etiquette – that the sport requires. Just because you’re playing in a friendly, recreational, social league doesn’t mean the rules can be ignored. No, Miss Lead, you are not supposed to be in the house when the score is being determined. No Mr. Vice, you shouldn’t be sliding down the ice when the other team is throwing. You just burned a rock as it crossed the hogline? Resolve to learn the rules, and make everyone happy and safe on the ice. Do more Do you volunteer? Do you donate to causes such as capital expense funds or prizes for the Little Rock bonspiel? Do you encourage the new curlers and cheer on the old? Many of the clubs featured in Around the House this season so far tell stories about curlers going above and beyond – getting new clubs off the ground, rebuilding after devastating fire, or pulling together a year-long centennial celebration, and these are just a small sample. It so often seems that the same people can be found taking on volunteer tasks, sitting on club executives and committees, or bringing the donations for the bonspiel auction. Make 2012 your turn to contribute. Resolve to do more, to help out more, to carry more of the volunteer load, because that’s how clubs thrive. Best wishes for a healthy, happy, thriving 2012 for you – and for your curling club, too.