Relentless the word for Team World at Continental Cup

Relentless seems to be the description for Team World at the eighth World Financial Group Continental Cup of Curling at Langley, B.C. The visitors, embarrassed a year ago at St. Albert, continued to press forward in singles competition at the Events Centre by winning four of six singles matches and, in addition, grabbing eighth bonus points for an overall 24-8 edge on the afternoon event. 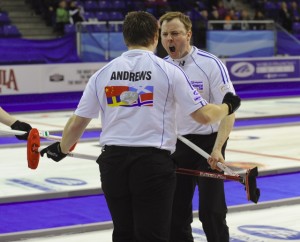 That success translated into a 124-76 points lead, a difference of 48 points, heading into the final two rounds of skins action later tonight and Sunday. “I like this better than last year,” said Team World coach Peja Lindholm, the three-time world champion from Ostersund, Sweden. “We’ve had better preparation here this year. We had a day at the Langley Curling Club and we got together and made team bonding and I really think it has helped us. We didn’t have a chance before to do that. “We’re trying to make each one better, not just playing for yourself. It’s a big team here.” In singles, which features individual players playing six prescribed curling shots, World curlers Eve Muirhead, Bingyu Wang, Anette Norberg and Thomas Ulsrud logged victories. Muirhead defeated Amber Holland of Canada 15-11, Wang shaded Stefanie Lawton of Canada 21-20, Norberg bested Patti Lank of the U.S. 19-11 and Ulsrud defeated Glenn Howard of Canada 17-15. In other matches, Jeff Stoughton of Canada outpointed Tom Brewster of Scotland 25-16 and Pete Fenson of the U.S. edged Niklas Edin of Sweden 15-14. Each singles match was worth four points with a eight-point bonus going to the side with the highest aggregate total for the six matches. “We still have 90 points on the line tonight and 110 tomorrow so no sweat yet,” said North American coach Rick Lang of Thunder Bay, who coached the winning Amerks last year. “We still have half the points yet to be decided. But they (World) are playing great. I thought we had the advantage in the morning games and this afternoon but they came through with great shots. “I know we have great horses going out there in the last skins games. I think we’ll succeed in making it an exciting game tomorrow. “This actually reminds me a bit of last year in that we had the right side of the inch there and we came up with all the big shots and they’re doing the same thing this year. But we don’t want it to end here tonight so we’re going to work hard.” The winning team must surpass 200 points to clinch the Cup victory. That would mean Team World would require a 77-point haul from a total 120 available in 6:30 p.m. matches in order to close out the argument in advance of Sunday’s finale. In the 30-pointers, Muirhead of Scotland tackles Holland of Canada in women’s skins, Howard takes on Edin in men’s skins and teams skipped by Ulsrud (Norway) and Stoughton (Canada) go at it in mixed skins. The Cup debate concludes Sunday with women’s 55-point skins (Stefanie Lawton of Canada vs. Bingyu Wang of China) at 10:30 a.m. and 55-point men’s skins (Jeff Stoughton of Canada vs. Thomas Ulsrud of Norway) at 5 p.m. Draw 8 Media Scrum