When the conversation turns to the best vice-skips in women’s curling, Amy Nixon’s name should be prominent. The long-time third for Shannon Kleibrink’s Calgary team has been one of the world’s most consistent players for nearly a decade, bringing a blend of passion and skill to one of Canada’s best teams. 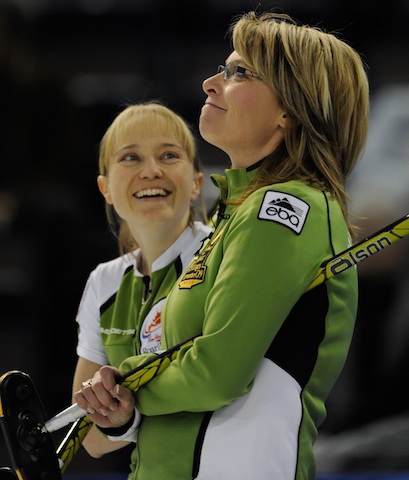 Since joining forces with Kleibrink prior to the 2003-04 season, that partnership has produced three Alberta women’s titles and a second-place finish to Jennifer Jones at the 2008 Scotties Tournament of Hearts in Regina, an Olympic bronze medal in 2006 at Turin, a runner-up finish in the 2009 Tim Hortons Roar of the Rings Canadian Curling Trials in Edmonton and numerous cashspiel victories. As well, Nixon, a two-time Scotties first-team all-star third (2004, 2008) managed to help Kleibrink finish second at the 2003 Canadian Mixed Curling Championship, and even put together a pair of victories at the Nanton Mixed Meat ’Spiel, a southern Alberta tradition. While Nixon, a practising lawyer, is best-known for the work she does on the ice with Team Kleibrink, she’s an avid booster of the sport behind the scenes. She has volunteered her time over the years at various youth camps in Saskatchewan, Alberta and B.C., taking after her dad, Daryl, and her grandfather, Harvey Forner, both of whom served as coaches during their curling careers. Birthplace: Saskatoon Hometown: Calgary Curling Club: Glencoe Current Team: Team Shannon Kleibrink Position: Third Delivery: Right Nickname: Nix Quick Hits with Amy Nixon Do you have any superstitions? “I have routines. I typically deal with the brooms and broom bag during major events as it gives me something to think about. I think superstitions are an invitation for distraction.” Three people, living or not, whom you would invite to a dinner party. “My friend Laine Peters, who is always good for laughs and some outrageous conversation; Sam Richardson, who might be one of the few people who can tell more stories than Laine; and Dolvett Quince (a trainer) from Biggest Loser, because Laine and I always focus better when there is eye candy in the room!” If you could be a star any other sport, what would it be, and why? “Darts. I think it would be hilarious if I could compete with the burly guys from the U.K. in front of a rabid crowd of fans. I can hear it already….180!!!” If you could change any rule in curling, which one would it be, and why? “Move to talk time (when the clocks only run while no rocks are in motion) but give teams an extra minute in the extra end (five minutes instead of four). That would allow teams to play aggressive right to the end — good for the players, great for the fans.” What music, if any, do you like to listen to before a game? “It changes all of the time. Pretty much anything that’s upbeat, whether it’s country, rock, alternative — it doesn’t really matter. Favourite: — Website? “Facebook.com, best way to keep track of my family and friends during curling season and beyond.” — Order from Tim Hortons? “Multigrain bagel, toasted with peanut butter and jam and a large chai tea, black. Or, ham and Swiss on brown (no sauce), one honey dip timbit (one timbit, three bites) and more chai tea.” — Vacation destination? “Anywhere with my husband Mike — Las Vegas, the Rockies, Guelph to visit my brother’s family, Saskatchewan and Manitoba to visit our extended families.” — Junk food? “Chocolate almonds! Do dark beer and Malbec count as junk food?!” Do you have any pet peeves? “Players who wrench my hand off when we shake before or after a game. Ladies: I’m just little!” Person who had the most influence on your curling career. And why? “My dad, Daryl Nixon, hands down. I learned to curl in a program he ran on Saturday mornings at the old Wheat City Curling Club in Regina. He always believed in me and supported me unconditionally. A close second: my Grandpa Harvey Forner. We lost grandpa in the spring of 2011, but I can still see him ringing the cow bell in the stands and yelling at me from behind the hack as a young ’un to “PUSH” as hard as I could. Without question the teammate who has had the most influence on my curling career (and my personal life) is Shannon Kleibrink. She is just a very good person and friend.” First thing on your Bucket List? “Aloha! Mike and I need to head to Hawaii to see it for ourselves. The real first thing on my bucket list is more time off work so that I can go to places like Hawaii!” Favourite pastime between draws at cashspiels? “Games! Marbles, dice, Dutch Blitz, Wizard, cards. Marbles gets especially vicious with the team! Also, blackjack! Shannon and Chels (lead Chelsey Matson) LOVE it! And curling up with a book.” Mixed doubles in the Olympics — thumbs up? Thumbs down? And why? “It tortures me that mixed doubles has no sweeping. While I can’t thumbs-down a variation of the sport I love that could bring more people to our game, I just cannot imagine getting really engaged in watching or participating in mixed doubles.” One thing most people don’t know about you? “I find it very calming to bake in my kitchen; I am a crazy cat lady (OK, I only have two, but I love them to bits). I have three degrees from the University of Calgary. One of the things I enjoy most is camping with my husband Mike.” Your ideal shot to win an Olympic gold medal: “Anything!” 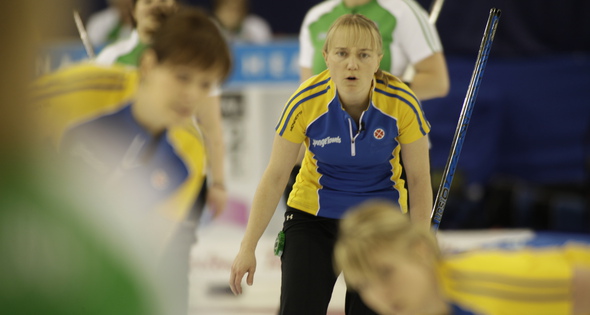