In the end, it was just a matter of time. And the time was short. With one point required to lock up the World Financial Group Continental Cup trophy, Team World skip Thomas Ulsrud of Norway waited, and waited, and pounced on Sunday night at the championship finale in the Langley, B.C. Events Centre. In order to retain last rock in the 55-point men’s skins, Ulsrud tossed his last rocks away in the first two ends, yielding two four-point skins to North America rather than settle for carryovers. But leading 200-153 overall, the World skip was afforded a routine open tap in the four-foot for a deuce with last rock in the third end and that netted a five-point skin and catapulted Team World over the top in the eighth international competition. 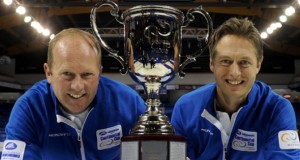 The final count: World 235, North America 165. The World and the Amerks now have won four times each, and neither unit has managed to be a repeater since the event was unveiled in 2002 at Regina with the North Americans winning. “That,” said World coach Peja Lindholm, “will give me some motivation.” The final tab in the final match was 35-20 for Team World but beyond the third end it was simply a battle for the $13,000 up for grabs to the winning team. Team World won $65,000 for its overall conquest while Team North America members divvied up $26,000. Stoughton and his Winnipeg team of Jon Mead, Reid Carruthers and Ben Hebert were required to manufacture a sweep of the 55 points, something no men’s team had ever before accomplished in the event. But the strategic battle of wits dictated that Stoughton couldn’t be heavy with any shot, leaving a rock behind the teeline. In the third, he left his last one vulnerable to Ulsrud, who directed Torger Nergard, Christoffer Svae and Havard Vad Petersson. “We may have made a statement here that was the talk of the town,” World coach Peja Lindholm of Sweden said of the team’s no-drinking edict at the start of the competition. “But we’ll leave the future for the future. “We were prepared, And we showed our players that we were taking this very seriously, that we weren’t just here for a good time. We were determined to win this and from that point we could also have a lots of fun. “Thomas and the team stuck with our plan, they were very calm and patient. Those were key words. It helped us first of all win the Cup, secondly win the game. “I believe we won every day and I couldn’t have expected that before we came here. I’m really proud with the way we were playing.” Team World, by virtue of a 30-25 skins victory from China’s Bingyu Wang over Canada’s Stefanie Lawton on Sunday morning, fell a mere one-point short of the magic 201-point mark leaving Stoughton’s outfit in its almost impossible predicament. Patterned after golf’s Ryder Cup, the championship could have wound up in a deadlock had Stoughton swept the last match, thereby allowing North America to retain the trophy. But that was the longest of long chances. “We need the sweep, obviously,” said losing Amerk coach Rick Lang. “It was like the whole week has gone for us. We get our hopes up a little bit and everything is going really well and looking good and you think it’s great and then they come back and finish us off. Every time we thought we had hope they came back and stomped on us. You have to give them credit. “It’s kind of disappointing, but Team World definitely deserves its victory. We couldn’t afford any mistakes and we made a couple in that third end.” Team World took control of proceedings Thursday with a narrow points lead and failed to relinquish it throughout the four-day argument. Ulsrud and Co., gave up four of the first five skins in the final but cleaned up in prize money by winning the last three. Trailing 20-6 after five ends, Ulsrud struck for a last-rock double-kill and an eight-pointer in the sixth, then Stoughton conceded a 10-pointer in the seventh in order to retain the hammer for the final exchange but Ulsrud succeeded in stashing away a rock in the four-foot there and Stoughton missed an attempted angle runback with that last rock. “We only need one point and we basically had eight darts to throw,” said Ulsrud on his way to a champagne celebration. “It might have looked kind of silly out there but we knew we could do it with hammer and that’s what we were looking for. It was the plan going in. “I would have hated to be in his (Stoughton’s) shoes. After we got the first skin and won the cup, we still had the game to play. My shoulders dropped a bit and we started playing real skins. We got some good breaks at the end.” Analyzed Stoughton: “We were behind the eight-ball and we started the game not being able to give anything away but we just couldn’t get that last one in there in the third end. “But I thought we played pretty well after that. It was eventually going to get us, we just didn’t know when.” When it came down to last stones for the additional prize money? “That angle-raise is pretty tough way to win that.” North America also previously won the competition in 2004 (in Medicine Hat), 2007 (in Medicine Hat) and 2011 (in St. Albert). Team World won in 2003 (in Thunder Bay), 2006 (in Chilliwack) and 2008 (in Camrose). There were no Continental Cups in 2005, 2009 and 2010. Final Media Scrum