The road to the 2012 Tim Hortons Brier continues with an update from Central Canada including Ontario, Northern Ontario and Quebec. 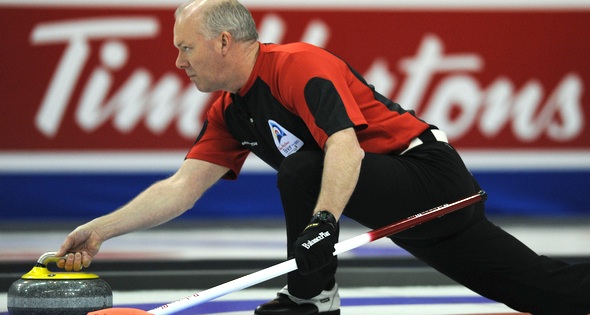 Ontario: Three-time world champ Glenn Howard will be gunning for his seventh straight trip to the Brier when he leads his Coldwater & District Curling Club team onto the ice at the Stratford Rotary Complex in early February for the Dominion Tankard finals. Howard and his team of Wayne Middaugh, Brent Laing and Craig Savill get a bye to the 11-team round-robin championship as the reigning Ontario title holders. Actually, the team has been tweaked a bit since it lost to Manitoba’s Jeff Stoughton in the 2011 Tim Hortons Brier final. Middaugh, a world champion skip in his own right, has taken over for Richard Hart at vice, and hopes to return to the national stage for the first time since 2005. December zone competitions across the province earned 32 teams the right to advance to regional play in four jurisdictions. Double knockout regional play, held over the weekend of January 7-8 has separated the wheat from the chaff, and eight teams now know they will be joing Mr. Howard in Stratford. Greg Balsdon, who skipped his team to the runner-up spot at last year’s provincial Tankard, will be returning to try his luck again. He and his Loonie Curling Club mates qualified out of Region 1 along with Ottawa Rideau’s Bryan Cochrane. Cochrane skipped Ontario to a 5-6 record at the 2003 Halifax Brier.  Annandale’s Mark Kean and Thornhill’s Mike Anderson survived Region 2 play, while five-time Brier participant and former world champ Peter Corner of the Brampton Curling Club will lead the way out of Region 3.  A second team out of Brampton, skipped by Dayna Deruelle, survived Region 3 “B” side play and will also travel to Stratford.  Listowel’s Daryl Shane and Harriston’s Jake Higgs prevailed out of Region 4 and will be looking to leave their mark on the Festival City. Last chance Challenge Round competitions held over the weekend of January 13-15, produced the last two entries to the Dominion Tankard finals. Arnprior’s Chris Gardner and Woodstock’s Wayne Tuck Jr. skipped their teams to East and West Challenge Round victories respectively, and will round out the field in Stratford. 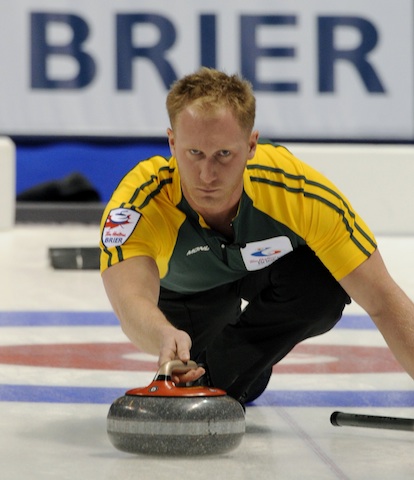 Northern Ontario: Twelve teams will comprise the field for the 2012 Dominion of Canada Northern Ontario Provincial Men’s Curling Championship when play gets underway at the Soo Curlers Association in Sault St. Marie from February 5-12. Brad Jacobs and his Soo Curlers team of E.J. Harnden, Ryan Harnden and Scott Seabrook earned their place in the finals shootout based on their early December victory at the Kia Classic Superspiel. The Jacobs foursome will be attempting to make their third straight Brier appearance, after finishing with a record of 7-4 at last year’s national championship in London. The Thunder Bay squad of Colin Koivula, Eric Theriault, Justin Whitehurst and Jordan Potts assured their slot in the Soo when they captured the Courtesy Freight Northern Ontario Superspiel in mid-November. Five teams qualified by way of regional play held throughout the north from January 5-8. Two-time Brier skip Tim Phillips will be on home ice in February when provincial final play gets underway at the Soo Curlers Association. His team survived regional play along with squads skipped by Stratton’s Trevor Bonot, McIntyre’s Dave McInnis, Mattawa’s Pat Gelinas and Joe Scharf of the Port Arthur Curling Club. Qualifying playdowns at the Copper Cliff Curling Club and the Fort William Curling Club over the weekend of January 20-22 will determine the final five entries for the championship field. Quebec: 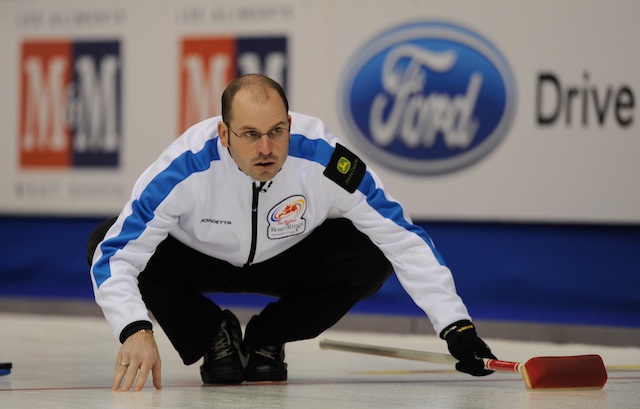 The last time the Tim Hortons Brier was held in Saskatchewan, Quebec’s Jean-Michel Menard captured the championship title in Regina. He and his Etchemin Club de Curling team of Martin Crete, Eric Sylvaun and Philippe Menard would love the opportunity to return to the “Wheat Province” for the 2012 Tim Hortons Brier in Saskatoon. The Menard team is one of four teams to guarantee themselves berths in the Quebec Tankard provincial finals through the accumulation of competition points. Chicoutimi’s Robert Desjardins, Kenogami’s Serge Reid, and two-time Quebec champ Martin Ferland will all be at the tee head when Tankard play kicks off on January 24 in Kenogami. The 12-team, triple knockout preliminaries will be followed by a 4-team Page playoff system with the final game scheduled for January 29. Eastern and Western zone playdowns were held over the weekend of January 6-8 advancing four teams each to the Kenogami Tankard championship. Laviolette’s Phillipe Lemay and clubmate Frederic Marchand each skipped their respective teams out of the East playdowns, as did Trois Rivières’ Pierre Gervais and Baie Comeau’s Simon Hebert. TMR Laval’s Francois Gagne, Thurso/Laval’s Simon Dupuis, Pointe Claire’s Kevin Goldberg and Rosemere/Glenmore’s Steve Gagnon gained their team entries to the provincial final through West qualifiying play.