Team Canada curlers will step on the podium to receive their bronze medals today – the first medals won by Canadian athletes competing at the Winter Youth Olympic Games taking place in Innsbruck, Austria. The medal ceremony was postponed from Thursday, when construction workers found an unexploded World War Two aerial bomb near the presentation venue, causing a quick change of schedule. Despite a disappointing loss to Italy in the semi-finals of the mixed team curling competition, the young Canadians rallied throughout a tough eight ends to defeat Sweden 6-4 in the finals and earn the bronze. 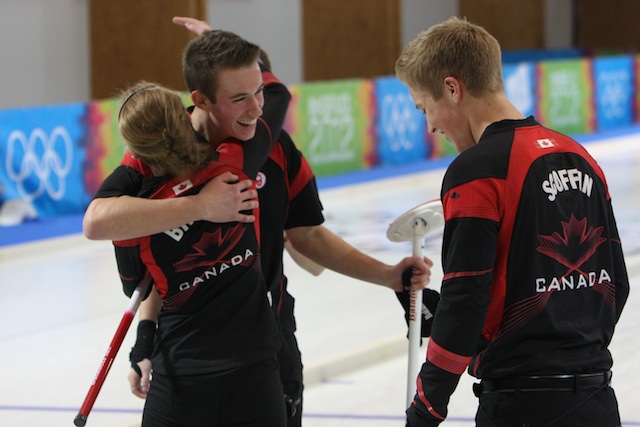 “That was an amazing game,” said Canadian skip Thomas Scoffin after the game.  “I give full credit to the Swedes. That was a battle till the end.” The eighth end provided an exciting finish, according to Canadian coach Helen Radford, who has been working with the team since it was assembled last April.  “Sweden was sitting two in a position to win and Thomas made a fantastic cross the house double,” said Radford after the game.  “With a guard still in play, the Swedish skip buried a rock behind it.  On Thomas’s last shot he made a perfect freeze to out count their rock.  It left Sweden with an open draw to the full eight foot for the tie.  The Swedes swept the rock the length of the ice, but came up six inches short of scoring and the Canadians won the bronze medal.” “My team played one of the best games I’ve ever seen them play,” said Scoffin. “It feels really good to come through in the last end like that with two good shots. There was no stopping us, and we knew it. I couldn’t ask for three better teammates,” he added, referring to vice Corryn Brown, second Derek Oryniak and lead Emily Gray. Scoffin also had words of praise for coach Radford. “It was pretty heart-breaking [not to make the final] but we have a great coach who got us out of the funk. I think we came back as the more prepared team overall and it turned out for us.” “We have been part of a very exciting journey together since last April and for the team to end on the podium is a very rewarding feeling,” Radford said at the end of the mixed team competition. “These four athletes have embraced this opportunity with complete passion and commitment.  They all had to adjust to playing a new role and have adapted with great maturity.  This team kept getting stronger on and off the ice and it was a pleasure for me to be part of this journey. They all represented Canada very well and I am proud of each one of them.” Next up is the Mixed Doubles, a unique 32-team competition in which one male and one female from different countries form a team. But first, it’s the medal ceremony. “Curling is receiving the first ever medal for Canada at the Winter Youth Olympics,” said Radford. “What an honour and an incredible memory!”