Team Canada vice Corryn Brown, of Kamloops, B.C., and Austrian teammate Martin Reichel are through to the quarterfinal round in the Mixed Doubles curling competition at the Winter Youth Olympic Games in Innsbruck, Austria. Canadians Emily Gray, of O’Leary, P.E.I., and Derek Oryniak, of Winnipeg, Manitoba, were eliminated in the first round of the 32-team, single-knockout event. 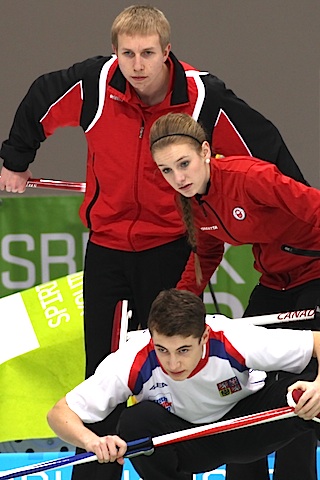 Team Canada skip Thomas Scoffin, of Whitehorse, Yukon, made it to the second round with New Zealand teammate Kelsi Heath, but lost a close 6-5 decision after Russian Mikhail Vaskov made a highlight-reel run-back double to score two points in the eighth end. “I was thinking about the delivery of the last stone a lot and I actually wanted to do it a little bit differently,” said Vaskov after the game. “Thankfully it worked out well for us!” Following these results, Italy, China, Sweden, Estonia and New Zealand will no longer be represented in the Mixed Doubles competition after all four players from these nations have been eliminated. While Team Canada’s Scoffin, Oryniak and Gray cheer her on from the sidelines, Brown is feeling positive about her team’s chances. 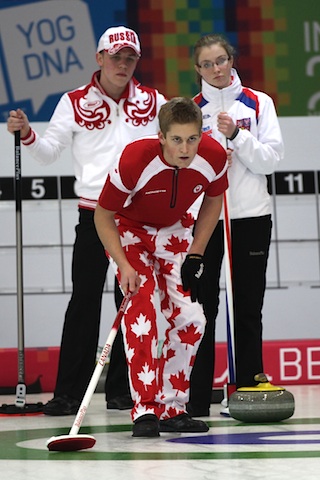 “I’m starting to learn more of the strategy,” said the Team Canada vice who skipped the B.C. women’s curling team to the 2011 Canada Winter Games gold medal. “I’m starting to play a lot more offensively because you need to have a lot of rocks in play. You can’t hit until five stones are in play, but since the first game I’ve grasped this new concept very well.” She also had praise for Reichel, who played second on the Austrian team during the Mixed Team competition in which Canada won the bronze medal. “Martin’s been doing very well as well. It’s key to have the first rock position spot on and he’s been making his last stones count,” she said. Reichel was equally positive about his Canadian teammate. “I’m learning a lot from my partner. She puts up some really good shots with the three stones in the middle, which always makes my last shot easier. We’re working well as a team together and hope it continues.” Quarterfinal action gets underway at 17:00 local time (CET), with Brown and Reichel facing the Russia-USA duo of Marina Verenich and Korey Dropkin. Medal games will take place at 13:00 local time (CET) on Sunday 22 January. 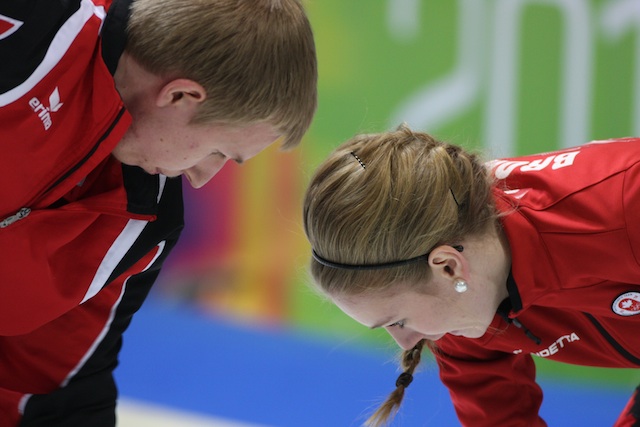