The Canadian flag was flying high at the presentation of the Mixed Team bronze medal to Team Canada on the final day of the 2012 Winter Youth Olympic Games curling competition on Sunday. 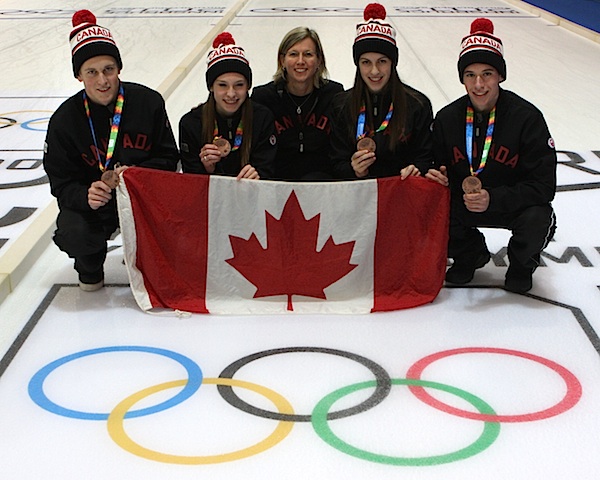 Action on and off the ice wrapped up at the Innsbruck Exhibition Centre Curling Hall with the presentation of medals to winners of the Mixed Team and Mixed Doubles competitions. Switzerland’s Michael Brunner was the biggest winner, earning gold medals in both events. Corryn Brown of Kamloops, B.C., vice of Canada’s Mixed Team entry, was the last Canadian standing in the quarterfinals of the Mixed Doubles competition – until she and Austrian teammate Martin Reichel gave up a 9-3 decision to the eventual Mixed Doubles bronze medalists, the Russia-USA duo of Marina Verenich and Korey Dropkin. 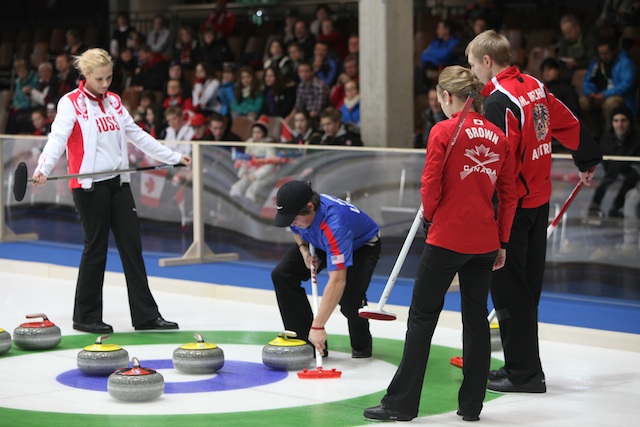 “They did really well,” said Brown after the match. “They didn’t really miss much, and they had really nice draw weight. Their rock positioning was just a little better than ours. We came out not on top form there.” Playing mixed doubles with a teammate from another country had its challenges for many of the teams, but Brown was enthusiastic. “It was awfully cool with the language barrier,” she said.  “You had to get used to new languages. I definitely liked Mixed Doubles and it was a different game of curling. It presented a lot of challenges and we just had to react.” From January 13 to 22, 2012, over 1,000 athletes, aged between 15 and 18 competed in the seven sports on the Olympic Winter Games programme, including a number of events that were created especially for the Winter YOG. As well as participating in the sports competition programme, athletes also took part in a unique Culture and Education programme (CEP) during the Games. Team Canada’s four young curlers – Thomas Scoffin (Whitehorse, Yukon), Brown, Derek Oryniak (Winnipeg, Manitoba) and Emily Gray (O’Leary, P.E.I.) – were chosen for the team in March 2011 and have been training individually and together since then under the guidance of Canadian Curling Association national coach Helen Radford. The team had to wait several days to actually get their hands on their medals: the discovery of an unexploded World War Two aerial bomb in a near-by construction site caused the postponement of Thursday’s medal ceremony. So although it took until Sunday for the presentation, the medals Scoffin, Brown, Oryniak and Gray won in the finals of Thursday’s Mixed Team event were in fact the first medals won by any Canadian athletes at the first-ever Winter Youth Olympic Games. “Curling is receiving the first ever medal for Canada at the Winter Youth Olympics,” said Radford after the Mixed Team competition ended. “What an honour and an incredible memory!”