The road to the 2012 Scotties Tournament of Hearts continues with an update from Prince Edward Island. 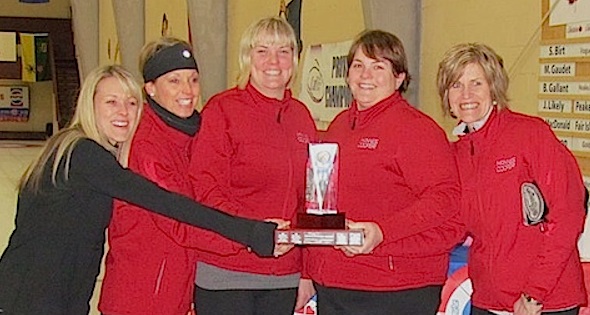 The year was 1983. Pierre Trudeau was Prime Minister; The Police had the number one song with “Every Breath You Take”; and Kim Dolan, then known as Kim McLeod, made her first appearance at the Canadian women’s curling championship as skip for the P.E.I. entry. She has made numerous appearances on the national stage since then. She’ll make another in Red Deer at the 2012 Scotties Tournament of Hearts, after capturing Prince Edward Island’s provincial crown with a 6-4 win over Meaghan Hughes on Monday night. Tied 2-2 after six ends, Dolan engineered a score of 3 in the seventh and a steal of 1 in the eighth en route to the victory. Both teams play out of the Charlottetown Curling Club, which is where the 2012 P.E.I. Scotties was held from January 20-23. Dolan will travel to Red Deer with her daughter Sinead playing second, Nancy Cameron at lead and Rebecca Jean MacDonald at vice. Hughes, a four time P.E.I. junior champion, was supported by Stefanie Clark, Jackie Reid and Tricia Affleck in defeat. The Dolan rink persevered, not only in the final game, but throughout the tournament. In the Sunday afternoon semi-final, against Sarah Fullerton and her Charlottetown Curling Club rink of Michelle McQuaid, Sara MacRae and Hillary Thompson, Dolan and company battled long odds in an exciting 10-9 extra end victory. Tied at one apiece playing the fourth end, Fullerton scored what easily could have been a knockout five ender, but the Dolan squad showed no sign of surrender. The 53 year-old Scotties vet answered with a score of 3 in the fifth and 3 more in the ninth in scratching her way back for the win. The Fullerton foursome can take consolation in knowing they are still headed to a national championship after capturing the island’s junior title earlier this year. They’ll head to Napanee, Ontario for the M & M Meat Shops Canadian Juniors, when they’re held from February 4-12 at the Strathcona Paper Centre and the Napanee and District Curling Club. Tied with Hughes with 4-1 records after round robin play, Fullerton was forced to play in the semi-final because her one loss was to Hughes. Dolan finished the preliminaries with a 3-2 record, good enough for third place and a berth in the semi-final. Six time champion and defending title holder Suzanne Birt of the Charlottetown Curling Club finished with a 2-3 record, while club mate Donna Butler and Tammy Dewar of the Montague Curling Club could each manage but one win in their five games. The 2012 Scotties Tournament of Hearts takes place February 18-26 at Westerner Park, Red Deer, Alberta.