Canadian University teams off to a slow start in Karuizawa

Team Canada got off to a bit of a slow start on day one at the Karuizawa International Curling Championships in Japan, with both our teams dropping their first games. 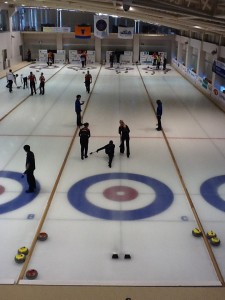 Our women’s team, who are the reigning Canadian University Champions from Laurier, fell behind early against a strong Swiss entry, but rallied to make it very interesting. Trailing 5-1 after six ends, the team engineered a very nice deuce in the seventh, and then kept it going in eight. In fact after after a perfectly executed come-around tap back on skip Laura Crocker’s last rock it looked like we might be sitting two. Then the Swiss skip, who only needed to draw a piece of the eight-foot to secure victory, ended up pulling the string and came up a foot short of the rings. Alas, it didn’t end up mattering because we lost a really close measure and only stole a single point. Otherwise, the game would have gone to an extra end with momentum very much on our side. 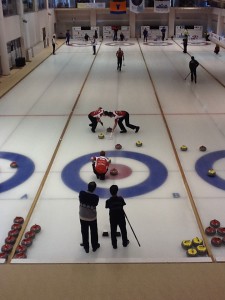 The men’s game followed a similar pattern, with the boys from Memorial University finding themselves down 3-1 without hammer after six ends to a strong and experienced team from Norway. However, we then played a perfect seventh and were sitting three, with two fully buried in the four foot when the Norwegian skip came to throw his last shot. However, he ended up making a difficult run-back double to cut us down to a single point steal. Then, in the eighth, with a chance to sit shot buried in the four foot, Canadian skip Colin Thomas’ last rock just ended up rubbing the guard, and unfortunately the game was over. The good news is that both of our young Canadian teams played much better at the end of their games than at the start, which will hopefully set us up for a better Day Two. It’s going to be a long one, with three games each, but I’ve got a good feeling that we’re going to get things moving in the right direction. Go Canada Go! Rob Krepps, Canadian University Coach