It’s a simple fact in curling that a lead won’t win a game for a team on his or her own, but a lead can sure lose a lot of games with poor shots to open an end. But you’d be hard-pressed to find a loss that you could pin on the shoulders of Dawn Askin. 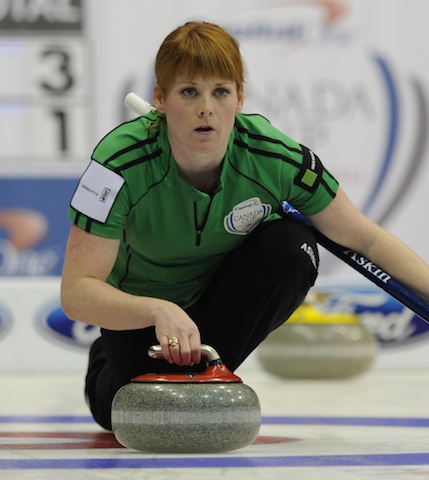 Simply put, the lead-rock thrower for Team Jennifer Jones is one of the best on the planet, with a combination of precision shot-making to set up ends and a wonderful sweeping ability. She’s played a significant role in the Jones team’s victories in three Scotties Tournament of Hearts, along with the 2008 world women’s championship, in addition to numerous victories on the World Curling Tour and the Grand Slam circuit. At the Hearts, Askin has been a first-team all-star lead twice (in 2011 and 2010) and a second-team all-star once (in 2008). Interestingly, Askin made her Tournament of Hearts debut in 2005 wearing Ontario colours with the Jenn Hanna team, and lost a heart-breaking final to Jones in St. John’s, NL. Two years later, she had moved to Manitoba and joined the Jones team. Askin enjoyed instant success, winning three Canadian titles and making the final in 2011 in Charlottetown, as well as playing in the 2009 Tim Hortons Roar of the Rings Canadian Curling Trials in Edmonton. Askin and her teammates — Jones, third Kaitlyn Lawes and second Jill Officer — can already start making plans for the 2013 Trials in Winnipeg; they clinched a berth by winning the Capital One Canada Cup of Curling in early December in Cranbrook, B.C. Askin, who has completed a pair of half-marathons, got an early taste of big-event curling when she was the flag-bearer for Rick Lang’s Northern Ontario team at the 1993 Brier in Ottawa. Birthplace: Ottawa Hometown: Winnipeg Curling Club: St. Vital Curling Club Current Team: Team Jennifer Jones Position: Lead Delivery: Right Nickname: Dawnie is probably the most popular amongst my friends. Quick Hits with Dawn Askin Do you have any superstitions? “I honestly don’t.” Three people, living or not, whom you would invite to a dinner party. “I would invite Scott Pfeifer’s wife Chantelle because the stuff that comes out of her mouth is hilarious. I’d invite two of my best friends from home because we don’t get to see each other a ton, and when we do, we have a ton of laughs, and also because they would find Chantelle funny.” If you could be a star in any other sport, what would it be, and why? “Growing up, I always thought if I played another sport it would be competitive swimming. I loved swimming in my pool growing up and would race anyone who would be up for it.” If you could change any rule in curling, which one would it be, and why? “I guess it would be to change the time clocks to thinking time.” What music, if any, do you like to listen to before a game? “I don’t listen to music before a game, but I guess if I did, it would be something upbeat. I like any kind of music, really; country is slowly growing on me.” Favourite: — Website: “IMDB.com. I like to watch movie trailers.” — Order from Tim Hortons: “Usually a whole-wheat bagel with cream cheese, and maybe a mocha; I’m sorta starting to like coffee.” — Vacation destination? “Anywhere in Europe!” — Junk food? “I love cheesies; anything with cheese, really.” Do you have any pet peeves? “I can’t stand impatient drivers.” Person who had the most influence on your curling career. And why? “I have a couple; my former coach in Ontario, Bob Hanna, basically taught me how to curl and instilled knowledge of the game in me. Another influence is my current coach Janet Arnott; having been one of the best leads in the game, she has taught me a lot over the years.” First thing on your Bucket List? “I’ve always wanted to visit Italy.” Favourite pastime between draws at cashspiels? “Eating! I love to eat; I have a snack station (as my team likes calls it) that is in my hotel room for whenever I get hungry.” Mixed doubles in the Olympics — thumbs up? Thumbs down? And why? “A bit of both; from a spectator’s point of view, I don’t like the fact there are no extra sweepers involved. That takes some of the intensity out of the game. But I think playing would be fun, so if the opportunity was there to try and get to the Olympics, I would for sure want to give it a go.” One thing most people don’t know about you? “I’m not a shy, quiet person once you get to know me.” Your ideal shot to win an Olympic gold medal. “I’ll take anything.” 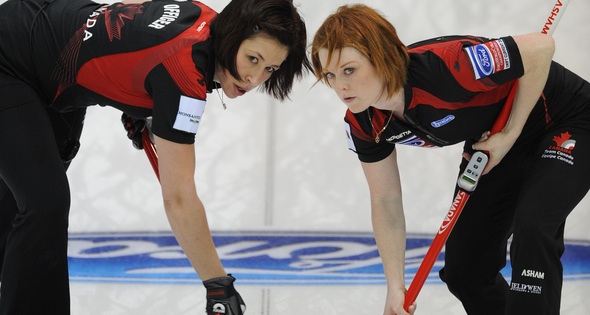