Jennifer Jones will be heading to Red Deer and the 2012 Scotties Tournament of Hearts after capturing the Manitoba women’s curling championship on Sunday, January 29, with an exciting 6-5 win over Morden’s Chelsea Carey.

The four-time national women’s champ will be accompanied by her St. Vital teammates, vice Kaitlyn Lawes, second Jill Officer and lead Dawn Askin, after they survived a gruelling weekend of high-pressure games at the conclusion of the Manitoba Scotties Tournament of Hearts held in Portage La Prairie from January 25-29. 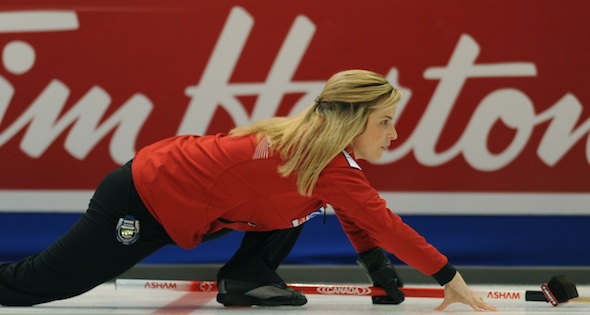 Entering Saturday morning’s last game of round robin play with the prospect of elimination looming with a loss, the Jones rink reeled off five straight do-or-die wins in the span of less than 30 hours: a remarkable testament to their gutsy perseverance. The last game, against an equally determined Carey rink consisting of Kristy McDonald, Kristen Foster and Lindsay Titheridge, came down to the last rock in the last end. As has been the case more often than not throughout her storied career, the thirty-seven-year-old Jones was up to the task. Her tap-back score of 1 broke the 5-5 deadlock between the two finalists.

For the record, the five straight wins included a last round triumph and subsequent tie-breaker victory over Winnipeg Granite’s Jill Thurston and then a third Saturday win over Miami’s Lisa DeRiviere in the page playoff battle of second place pool finishers.

In the Sunday morning semi-final game against Barb Spencer and her Fort Rouge team of Karen Klein, Ainsley Champagne and Raunora Westcott, Jones built up a 5-2 lead after five ends on the way to a 7-5 victory.

The Carey rink had advanced to Sunday’s final after finishing on top in their pool play and downing the Spencer rink 10-5 in the Page playoff involving first place finishers.

This was the second straight year that the Morden foursome came oh-so-close to winning the Manitoba women’s title. Last year they lost the final to Cathy Overton-Clapham by a score of 7-4.